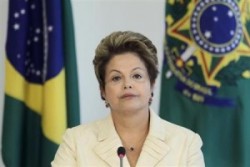 Transcripts published by Brazil’s largest newspaper, Folha de São Paulo reveal secret conversations that took place in March 2016, just weeks before the impeachment vote upon Dilma Rousseff, the democratically elected Brazilian President. They show explicit plotting between the new planning minister (then-senator), Romero Jucá, and former oil executive Sergio Machado — both of whom are formal targets of the “Car Wash” corruption investigation — as they agree that removing Dilma is the only means for ending the corruption investigation against them. See:
https://theintercept.com/2016/05/23/new-political-earthquake-in-brazil-is-it-now-time-for-media-outlets-to-call-this-a-coup/

9 Bedford Row have previously advised that the criminal process against President Rousseff was being conducted unfairly and was politically inspired by those who will judge her.

The principles underlying the Rule of Law in Brazil have disappeared.