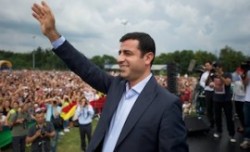 In Turkey, two members of the HDP (Peoples’ Democratic Party) are currently involved in legal proceedings amid allegations of participation in terrorist activities. HDP Co-Chair, Mr. Selahattin Demirtaş (pictured) and Ms. Figen Yüksekdağ, also a party co-chair, were arrested on the 4th November 2016 alongside seven other MPs.

Mr Demirtaş is accused of establishing or administering an armed terrorist organization, making propaganda of a terrorist organization, inciting people to hatred and enmity, inciting people to commit crime, and organizing and participating in meetings and marches in violation of the law on protest and assembly. His first hearing will be on 7th December 2017 at Ankara 19th Heavy Penal Court, 399 days after his arrest. The day before, Ms. Yüksekdağ is due to attend her third hearing on 6th December 2017 facing almost identical charges to those of her colleague. The hearing will be held at Sincan F Type Prison Campus in Ankara.

The HDP have released a statement on the legal proceedings against Mr Demirtaş, and how they believe Turkey’s Ministry of Justice is attempting to influence the outcome through instructing and pressurizing the courts. The HDP claim in their statement that “these “legal cases”, which in reality are political revenge operations carried out under the instructions of the AKP’s chair, ministers and administrators, will be recorded in history as a disgrace.”

The HDP invites people from overseas to attend the hearings in Turkey to demonstrate concern from the international community in relation to the collapse of democratic politics in the country. The party describes these cases as vital to Turkey’s political future. They make it clear that “observing these hearings will provide you (attendees) with the opportunity to bear witness to the political and arbitrary use of the law to silence democratic opposition, suspension of the rule of law, and destruction of the separation of powers.”

Call to observe the hearings of HDP Co-chair Mr. Demirtaş&Ms.Yüksekdağ