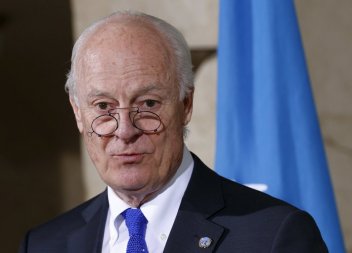 The United Nations Special Envoy for Syria, Staffan de Mistura, has stated that the credibility of the next round of peace talks will be in jeopardy unless the cessation of hostilities between all warring factions is resumed and humanitarian access to besieged parts of the country is improved.

Staffan de Mistura has said that if there is no significant development in the latter area by the 1st of June, humanitarian aid will have to be airlifted to the necessary locations. However, given the expense of how much that would cost, it is being viewed as a final resort.

At a recent press conference de Mistura said that: “Obviously we are in clear hurry to start re-introducing the next round of the intra-Syrian talks but the message was clear: if we don’t have the atmosphere conducive for increasing the cessation of hostilities tenure […] and a substantial improvement on the humanitarian access, then the credibility of the next round of talks will be in question,”

At the same conference, the UN Special Envoy made it clear that there is no ‘Plan B,’ emphasizing that the only way to reach a political solution to the Syrian crisis is through the intra-Syrian talks.

To read a transcript of the press briefing that the UN Special Envoy attended, click below: