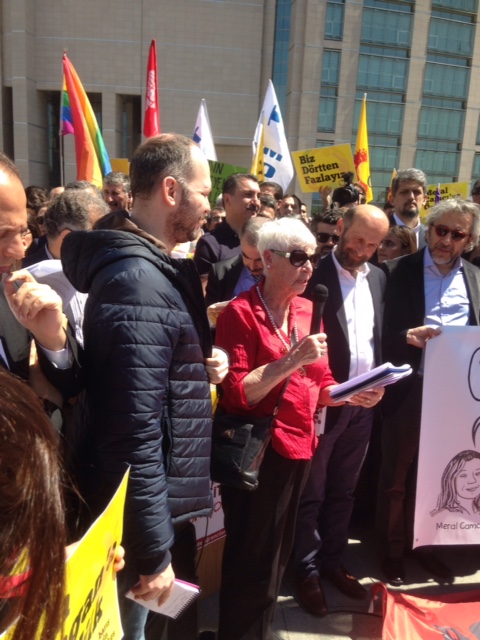 By Margaret Owen, reporting from Turkey

In Istanbul on Friday 22nd April, by mid-morning, thousands of people had gathered in the square outside the courthouse, the largest in the world, carrying banners and pictures of the 4 imprisoned academics, and bearing slogans demanding freedom of speech and an end to war and violence.

Hundreds of police in riot gear, carrying their shields, stood, ready for action. Water cannon trucks were nearby.

As one of the international observers I was asked to speak to the waiting crowd. Next to me, also speaking was the admired Turkish journalist Can Dundar, recently released from 90 days pre-trial detention after charges under the Terror Act were dropped. His alleged crime was to report on the exposure of Turkey’s complicity with the Dai’sh (ISIS) when a truck said by the government to be transporting medicines to besieged Aleppo, was found to be full of arms.

The courtroom assigned for the trial had only capacity for 100 people, but finally, 300 of us managed to squeeze in, with another thousand queuing outside. This trial has attracted world-wide attention, with 11 Consuls in attendance, including our own UK Consul and one from the US Embassy.

The four academics, 2 women, 2 men are Meral Camci, a psychologist, Kivanc Ersoy, a mathematician, Muzeffer Kaya, a historian and Esra Morgan, a philologist and translator. They and their lawyers tore the State Prosecutor’s indictment apart and argued that there was not one iota of evidence that any of them had associations with terrorist organisations (PKK) or that they had ever been in communication with, or taken orders from, or even knew the PKK co-chair Bizet Hozat.

Defendant Kaya described the events leading up to the violent attacks on Kurdish towns and villages, the civilian deaths, the curfews, the bodies of dead children left decomposing in the streets, the forced displacement of at least 355,000 inhabitants, the destruction of houses, mosques, and livelihoods. He explained: “We academics could not stay silent at these crimes. We wanted to say ENOUGH. Our children must not pay the price of this government’s mistakes, so the petition we signed was for peace.” He showed the bench the handcuff scars on his wrist. All defendants said they had no regrets in signing this petition and would do so again. “We are the conscience of Turkey,” said Ersoy, reminding the court of Jean-Paul Sartre as the “conscience of France” when he criticized De Gaulle over atrocities committed in Algeria.

Constantly, throughout the hearing, this position was repeated. One of the defendants explained that “asking for Peace is not a crime. We had to protest. We had no other alternative. We were up against a brick wall, with so many killed, and journalists, writers, teachers, trade unionists, Kurdish politicians, Kurdish co-mayors imprisoned.”

The lawyers pointed out several legal irregularities in the indictment and demanded the dropping of the charges and acquittals for all defendants. There was no reference to a specific crime and no evidence that any of the defendants even had any communication with the PKK co-chair.

They argued that the Prosecutor was manipulating the law to silence any person who criticises government policies. It was also argued that these academics were especially targeted because their sphere of influence was so broad and they had influence over the young. They denounced the indictment and this trial as a legal scandal and requested that the Judge end “this parody.”

Then the most extraordinary bizarre development occurred. The prosecutor quite suddenly, realising he was utterly defeated and had no logical rebuttal to the arguments, proposed that he would withdraw the indictment under the Anti Terror Act, and instead charge them under the infamous Penal Code Article 301 which makes it a crime to “to insult Turkishness”. However, in 2008, changes were made and it is now obligatory to get the Minister of Justice’s approval to file such a case. At this point everyone stood up and began to shout “release them ” and  “shame” until the Judge insisted we stay silent.

He and his fellow judges looked utterly disconcerted.  But instead of retiring to their chamber to discuss what to do (by this time the Prosecutor had rushed out to speak on his cell phone) to a back room, the three judges, in front of us all, started to use their mobile phones to call we knew not who. Erdogan himself? The Minister of Justice?

The Judge, still on the line, announced that he was adjourning the court for 10 minutes, but he remained in court with his colleagues, making further phone calls.  Suddenly, we were all told to be quiet.  The verdict came.  All four were to be released, no bail conditions, the case was adjourned till 27th September. Jubilation, people hugged, kissed, shouted with glee.  The families were overjoyed, some in tears.

But of course, there is absolute confusion, both among the academics (over 2,000 academics are still subject to investigation) and the lawyers. Will the Minister of Justice give the necessary approval ? What if he does not?  Does this proposal to use Article 301 apply to all the other 2,000 academics as well? What about the people who have been sacked, or had no renewal of their contracts?  Will everyone who signed the Petition have to wait till September to know their fate? Article 301 provides for imprisonment from 6 months to 2 years. Under Article 7(2) of the Anti-Terror Act, imprisonment could last 7 years.

This case has revealed, like never before, the deep flaws in Turkey’s Justice system and how it is being manipulated for political ends. It also reveals how any criticism of Erdogan and his AKP party is seen as a crime. Erdogan has called the academics “traitors”.

This trial has taken place just when the spotlight is on Turkey and Angela Merkel has promised to “hurry up” Turkey’s entry into the EU if Turkey will contain the Syrian refugees and stop them leaving for Europe.  This was a political trial, and calls into question whether Turkey will be able ever to comply with those international and European human rights standards that are a condition of her acceptance.