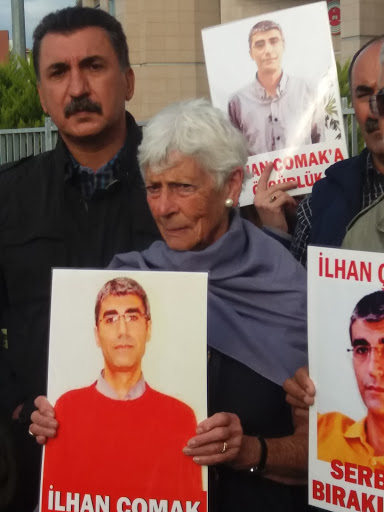 Today the final trial of the former University Student, Ilhan Comak, takes place. He was only 20 years old when arrested 22 years ago. Ilhan is from Izmir, but because he was arrested, charged with membership of a terrorist organisation, when studying here in Istanbul in 1994, all the numerous trials in which his lawyers have tried in vain to get his acquittal and release have been held here.

There are crowds of people gathering outside the court and in the adjoining cafe, hoping to gain entrance, including his parents and other family members, friends, MPs, and many lawyers, wearing their black silk gowns with their stiff red collars.

For Ilhan’s case is a dramatic one – so many years held in detention, he is now 41. He has lost his youth, and if today’s verdict goes against him he will stay in prison for up to another 10 years.

According to his lawyers there is not a shred of evidence to prove he has ever been “a member of a terrorist organisation”, or that he carried out acts under orders of the PKK.  Ilhan states he signed confessions under torture. This afternoon, at last, the verdict will be given. Everyone is nervous, dreading the worst. 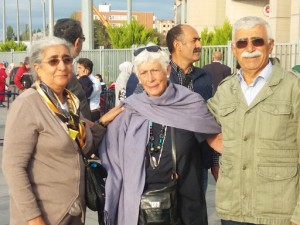 To my joy, in the cafe, I find my colleague and friend, the much admired, indefatigable and brilliant young lawyer, Ramazan Demir, of the Association of Lawyers for Freedom (OHD). His arrest and detention early this year was distressing. We international lawyers have always relied on his help whenever we have come to Turkey to observe the lawyers’ trials.

Ramazan Demir was released, on conditions, last month, after spending 156 days in prison, charged with “denigrating Turkey, by taking cases to the ECHR…and having contacts with foreign associations”. He described to me the grim conditions in the overcrowded prison, where he was held in solitary confinement for the first 11 days.  I learnt that under the State of Emergency all lawyers have been ordered by the Ministry of Justice not to take on cases involving terrorist charges.  As since the failed coup, there has been an unprecedented increase in such charges, those arrested will find it nearly impossible to get even an iota of justice.  Also, only lawyers who are not awaiting prosecution are entitled to work professionally. Many lawyers are now forcibly unemployed.

While waiting for the Court police to let us enter the building, I am acutely aware that there are no journalists among us, in spite of the importance of this trial. For Ilhan Comak is a famous figure, he has published 4 volumes of poetry, and a documentary film has been made about his life. His family are greatly respected and his long imprisonment including torture and abuse is a cause that Kurdish activists have campaigned about for years.

Yesterday, the government shut down another 200 media outlets, newspapers, and independent TV channels. I realise that my blogs are essential to fill the gap for I am the only independent international observer. I wish I had more time and space to fill the lacuna in information about these trials

Ilhan, in Kiriklar prison in Izmir, will not be here in court. Instead, we will see him on video. His parents tell me that, on the last 10 hour car journey to Istanbul, he was handcuffed, given no food or water, and was so dehydrated on arrival that he could not understand what was going on.

At last, 90 minutes late, the trial begins. Four defence lawyers take it in turn to address the judge, and his two co-judges. They go through the history of the case, the torture, the lack of any evidence, the fabrications and fictions contained within the indictment.  Another 24 lawyers for Ilhan are also present, ready to make their arguments if the judge will allow them.

The principal four lawyers angrily rebuked the judge for his failure to comply with the ECtHR order, made in 2008, for a retrial that was independent of the first trial. ” In a retrial, the previous verdicts should be ignored. This trial is a photo-copy of the earlier ones, even those held by a military tribunal”. One lawyer appealed saying ” I am speaking to your conscience. This defendant has already been in jail for 22 years. You have stolen his life. When you decide, think with your conscience”. Another attacked the judge and judiciary generally: ” You judges are prejudiced, it is apparent in your attitude to Ilhan Comak”. Another lawyer said the trial was Kafkaesque.

Only when the judge refused to allow other lawyers to present their arguments, because “you four lawyers have talked long enough” did real fury erupt.  ” You cannot stop us talking ” some shouted.

After a 15-minute break, the verdict came.  No change of verdict. No acquittal. The judge turned his head towards the video where we could make out the small figure of Ilhan Comak saying “God help you in the rest of your imprisonment”

Outside in the square the people, angry, gathered, made speeches, carried banners bearing Ilhan’s picture. There is misery and disgust. But the lawyers tell me they expected this result. “There is no independent judiciary. There is no justice. We need international support now in our struggle for the Rule of Law and for democracy. We do not even have freedom of thought anymore, nor of speech. Neither do we have freedom of assembly or freedom of the press. Help us”.  So I too made a short speech. 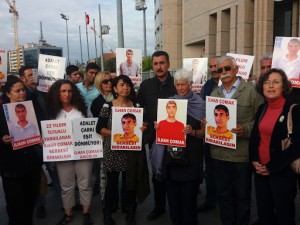 Margaret joins other people gathered in the square

Later we had a long meeting at the offices of the TCPS  (Turkey’s Centre for Prison Studies).  Several of the people gathered round the table had spent months or even years in prison, arrested when they were students. Mustafa Eren, was in prison for 11 years, and was released in his early 30s. He managed to return to university, obtain his degree and then a PH.D in sociology. But we heard shocking stories of torture and abuse of detainees. And especially of the brutal degrading treatment of women prisoners. Although there are, in theory, mechanisms for prisoners to report ill-treatment and torture, either the reports get “lost” and never reach Ministry of Justice officials who should receive them; or, those alleged to have inflicted acts of torture have a ready defence – that the prisoner was attacking them, or the allegation was malicious. Many prisoners dare not report these violations. 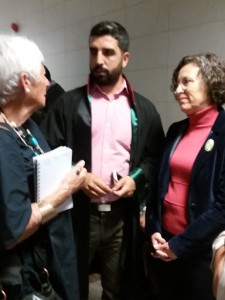 Margaret speaks with a female MP and a Kurdish writer

Since June this year, at least 400 students have been detained, but the number could be far higher. Every week all over the country, students and high school children are being picked up under the anti-terror law.  There are no outside observers to these trials. The rights of vast numbers of young people are being violated and the world is silent. Those meeting us this night begged for me to break the silence, and persuade more people to come and observe these trials, not just in Istanbul, but across Turkey.

The TCPS asks that we circulate their monthly reports on student arrests and detention and help them to gather international support.

Tomorrow a Press Conference will be held followed by the trial of two more students, one being Helic Turk.