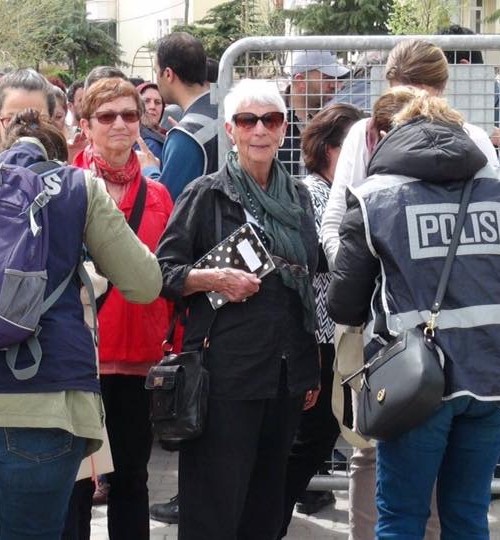 I left Diyarbakir at dawn on Friday for a three hour drive to Malatya where the trial of Ms Gultan Kisanak and Ms Sebhenet Tuncel was taking place. As I wrote in my first piece, both women are key leaders in the Kurdish struggle for justice, peace, human rights and gender equality. The trial was originally supposed to be held in Diyarbakir itself but for reasons not made entirely clear, the location was abruptly switched to Malatya.

When myself and other international observers arrived at the ‘Hearing Salon’ (originally a sports centre, but redesigned as a court for the post-July coup trials of the Gulenists) we were greeted by a heavy police presence. Initially, we were all told that we could not be admitted without permits from the Justice Ministry. After my fellow observers and I threatened to call our embassies, the local police chief relented. We were frisked, had our passports scanned and were finally admitted entrance to the makeshift court.

Makeshift is correct, given how we then found ourselves in what can only be described as a huge basketball stadium, totally inappropriate as a courtroom. International observers, families and numerous supporters were all confined to a set of seats right at the back of this large room. There were at least 200 of us in total.

A gap of 70 metres lay between the attendees and the podium where sat the Prosecutor, Judge, his two co-Judges, and to the left of them, eight lawyers. It felt as if you needed powerful binoculars to see them all. At the far end of the hall, a video screen had been set up from where Kisanak and Tuncel, accompanied by their lawyers, would appear from separate prisons to defend themselves via two live video feeds.

Between where I and the other attendees were sat and the Judge’s podium, there was a cordoned off area with 100 empty seats. From there we could have been given a much better position from which to view the trial. As the day progressed, events would only serve to confirm this.

The proceedings that unfolded were plagued by sound difficulties, not just because of the seating arrangements but also due to the acoustics in the hall itself. The voices of the lawyers, the Judge, the Prosecutor as well as the two defendants and their own lawyers on the video feeds, all echoed and were muffled in such a way that it was impossible to be sure who was speaking.

Further technical problems ensued when the video system broke down multiple times and it transpired that the screen itself was placed far beyond the sight of myself and the other attendees.

Suspicion began to mount that this awkward location had been deliberately chosen instead of the original in Diyarbakir to deter the families, supporters and observers such as myself, from attending the trial of these prominent, immensely admired, female, Kurdish politicians.

The trial itself was no less turbulent. It lasted from 10:30– 21:30, 11 hours, with 2 recesses. It was clear that the Judge was representing President Recep Tayyip Erdogan and the AKP (Justice and Development Party), seeing all criticism of the government, even pleas for a resumption of the peace process, as “supporting terrorists and the PKK (Kurdish Workers Union).”

The Judge demanded that each accused specifically answer the individual charges on the indictment sheet (though he claimed that this was too long to read out in full) and desist from making any political speeches. “This is not a place for politics,” he said, which is ironic given the trial itself was clearly political and not a legal one.

Gultan Kisanak, the co-Mayor of Diyarbakir, was specifically interrogated about a number of issues relating to her position. Why had she used Municipal cars to transport the bodies of dead PKK fighters? Were not her speeches at funerals of slain “terrorists,” and her visits to their families proof of her allegiance to the PKK?  Ms Kisanak was questioned about a building belonging to the Diyarbakir municipality, reportedly used by the PKK, but which she said had been rented out years before she became co-Mayor and had no idea who it was sub-let to.

Both Kisanak and Tuncel were accused of joining protests on the anniversary of the abduction of Kurdish leader, Abdullah Ocalan, and in attending demonstrations against the collective actions taken by Turkish government security services in 2015.

There were many robust rebuttals from the defence, including the assertion that the recent Municipal Law Amendment (that dismisses elected Kurdish co-mayors and appointing in their place unelected government representatives) violated the Turkish Constitution. “She is still Mayor of Diyarbakir,” declaimed one of Kisanak’s lawyers.

Ramazan Demir, a lawyer, who himself was recently a political prisoner, spoke for Ms Tuncel and asked the Judge to “Be brave, do the right thing. I would not like to be in your shoes, under your burden. Release these women today. The charges have no substance.” Demir also made reference to the recent announcement that two other Pro-Kurdish MPs had been released by a fellow Judge in Istanbul.

Margaret with other attendees after the verdict

However, by the end of this long, uncomfortable day it was decided that both women are to remain in prison whilst further investigations proceed. Another hearing is to take place on 20th June, with one small consolation that this time it will be held in the proper Malatya Court House.

Outside the ‘Hearing Salon’, now in the darkness of night, Ma Gulcihan Simsek of the DBP (Democratic Regions Party) attempted to give a press statement but her speech was curtailed by the intimidating presence of the police commander who warned that she needed “special permission to speak, due to the State of Emergency.”

Meanwhile, I was asked by a group of young Kurdish men why the UK was so silent on issues such as the trial that had just taken place, and why we along with Europe were seemingly abandoning the Kurds. I could only assure them that many people supported their struggle for peace and justice. I made it clear that we would continue our work for them, urging our governments to condemn Turkey for its massive human rights violations, and its destruction of an independent justice system.

PS. Whilst finishing this blog post I have received a telephone call informing me of the arrest and detention of some good lawyer friends of mine. This is most distressing.