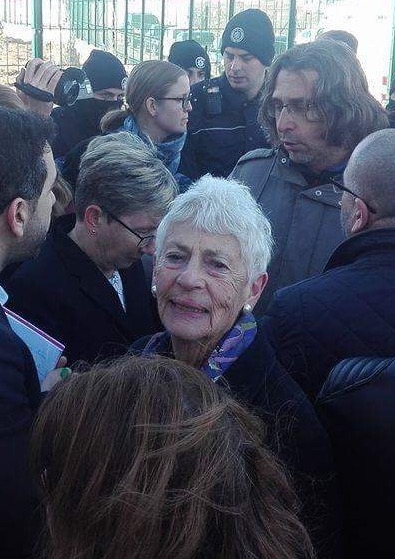 Another icy grey morning in Ankara, and we international observers again pile into two coaches, and then into the crowded buses for the drive to Sincan Prison Complex. On the way we discuss what we predict will happen this day, when clearly Demirtas will not be defending himself in person nor on video, and what the position of our respective governments might be in response to further evidence of Turkey’s rejection of international standards for fair trials.

The scene on arrival is dramatically different from yesterday. There are hundreds of people assembled on the muddy concourse outside the prison. Somehow, in spite of the ban on buses coming from the south-east and other regions, many people have found ways to get here to support their beloved HDP Co-Chair. His passionate and fiery speeches in Parliament and outside, at rallies and press conferences, calling for human rights not just for Kurds, but for everyone in Turkey, for an end to violence, for the rights of women, for peace, have made them fiercely proud of him, and they are furious at his detention.

There are many women, of all ages, in the crowd. Everyone is muffled up in woollen hats and scarves for the wind is bitterly cold. There is a lot of hugging and we, recognisable as the foreign observers, are warmly greeted, and embraced. Surges towards the gate are roughly stopped by a squad of police, and on this day there seem to be many more of them around us than yesterday. I am glad to see James Ford from the British Embassy has come to join us, and two members of the House of Lords.

But It soon becomes clear that we will not be allowed in to the court, so there is little point in staying around.  We learn that Demirtas’ trial is ongoing , in spite of him not appearing on video. But as we leave the area we see that the police are edging nearer the crowd with the water cannon at the ready. The atmosphere is tense, and people are angry, taking photographs of each other holding banners bearing Kurdish slogans, HPD logos and pictures of Demirtas.

Back in the city, the HDP arranges an afternoon meeting for us, with Demirtas’ lawyers returned from the court. We learn that Demirtas, like Yüksekdağ, must remain in prison, the trial is adjourned until 14th February. However, (although anything can be changed) the Court agreed that the defendant would be permitted to appear in person, and in the Ankona Regional Court, not the prison one.

The MP, Hisyar Ozsoy, Vice-Co-Chair of the HDP Foreign Affairs Committee, a distinguished lawyer, described the complex political background to these trials, emphasising how important our presence was, and asking us to be sure to return, in even greater numbers, to observe the February hearings: “Come back, with ever more people”.

He asked us to redouble our efforts to disseminate information on what is happening in Turkey to as wide an audience as possible, so that pressure can be put on Erdogan by our governments to halt the descent into the abyss of dictatorship and persecution. He spoke at length of the strange new alliances Erdogan is making, and of the critical impact his xenophobic, dictatorial way of governing is impacting not just on Turkey, but on Europe and the world. He warned that if Turkey does not draw back from the direction it is heading, it will take decades to get her back on the right track towards democracy, justice, and respect for the Rule of Law.

The lawyers for Demirtas denounced the methods used to indict their client. The charges were based on fictions, and there was never any concrete evidence. In these cases, there is no presumption of innocence. Rather, the burden of proof lies on the accused who must prove that he or she is not a terrorist. We learnt more about the appalling conditions in which Demirtas was held in the first months of his detention, the restrictions on family, friends and lawyer visits, but above all, how today there is no law in Turkey. Everything is arbitrary.

Every lawyer involved in these cases is at risk of arrest under the present emergency laws. We met many who have been in prison, or are under investigation, and whose passports have been cancelled. They are brave men and women.

Hisyar Oszoh said he was ashamed that we, the international observers, had been so badly treated and insulted, but believed that with our help and our governments, “we will overcome”.

I read out a statement from our international delegation, written by our colleague, London soliticitor Ali Has, which we hope to get widely circulated and published. Tomorrow we all go home.