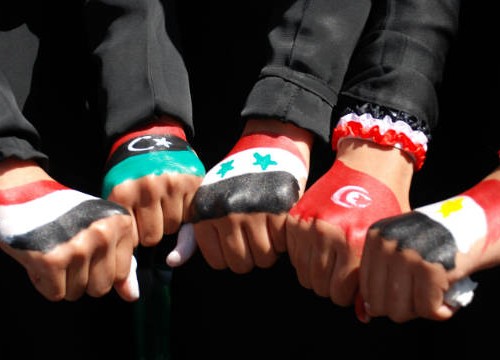 Arguing in support of humanitarian intervention, David Cameron, in his address to the 66th UN General Assembly meeting in September 2011, said that ‘we must always act with care when it comes to the internal affairs of a sovereign state, but cannot allow this to be an excuse for indifference’.

Cameron was speaking of the need to protect people and their civil and human rights by preventing their abuse. However, the broader language employed by Western states in response to what has become known as the Arab Spring has focused more pointedly on the alleged illegitimacy of unelected governments to suppress democratic dissent.

Given that the existing understanding of sovereignty does not enquire into the means by which leaders and governments come to power, today there is the implication at least that that understanding might be evolving.

It seems clear if we look to the practice by Western states of giving vocal support to people with democratic aspirations in autocratic ones, that the basis of any such recalibration will be the refrain that sovereignty now encapsulates a democratic requirement, which renders autocracies, by definition, not sovereign.

However, one had to wonder when looking at Cameron’s UN  audience how many state representatives were going along with his typically steamrolling oration and how many were appalled at the idea of more frequently countenancing intervention against distasteful but sovereign regimes, not least their own.

The legal grounds for militarily intervening in a state are still confined to either self-defence, a threat to international peace and security or invitation by the state concerned. There remains little legal link between sovereignty and democracy.

Article 25 of the 1966 UN Convention on Civil and Political Rights emphasises representative government and democratic processes and there are similar passages in the American and European Conventions on Human Rights, the latter, especially, explicitly tying democracy to state legitimacy. However, failure by a state to uphold these principles does not afford a right to others to enforce them.

That said, a lack of democracy as a precipitate to serious civil and human rights violations has been a marked focus of a broad cross-section of commentary concerning intervention in response to the events of the Arab Spring.

That commentary has discussed intervention in its multifarious forms and Britain and France foremost have spoken of a comprehensive assault on undemocratic and abusive regimes going beyond military action to include the full panoply of diplomatic, legal and economic weapons.

Although history does exhibit examples of democratic processes producing governments that have opposed them, Western states continue, quite reasonably, to promote such processes on the basis that in general they produce cooperative governments that accommodate their values.

Yet it is here that the limits of attempts to re-imagine sovereignty can be seen.

The end of the Cold War afforded new possibilities to enforce existing laws that had become moribund by the power realities of the conflict’s bi-polar form. The 1991 Persian Gulf War was the first expression of what was sweepingly called ‘the new world order’. Therefore, in many ways the history of intervention since the end of the Cold War more closely resembles the kind envisaged by the drafters of the UN Charter.

However, many states – a majority in fact – remain wedded to the traditional interpretation of sovereignty, perhaps including the guarantee of certain rudimentary rights, but definitely premised on an understanding that there are few limits to the exercise of legitimate coercive control within a defined territory.

This is essentially still the position of Russia and China as two veto-wielding, permanent members of the UN Security Council keen to avoid painting themselves into corners. And it is primarily they who will oppose attempts at to re-imagine sovereignty in which they see the influence of Western interests which – no matter how universally presented – they believe are opposed to their own.

In their opposition they will be supported in the West, however inadvertently, by those who point out the parallels between intervention against non-democratic regimes today and that on the grounds of religious persecution in the sixteenth and seventeenth centuries.

Thus, current attempts to re-imagine sovereignty by countries like Britain and France will be constrained in future by both domestic and international factors. Nevertheless, a two-tier system of sovereignty with the second tier hot seats occupied by unelected or fraudulently-elected governments may well emerge.