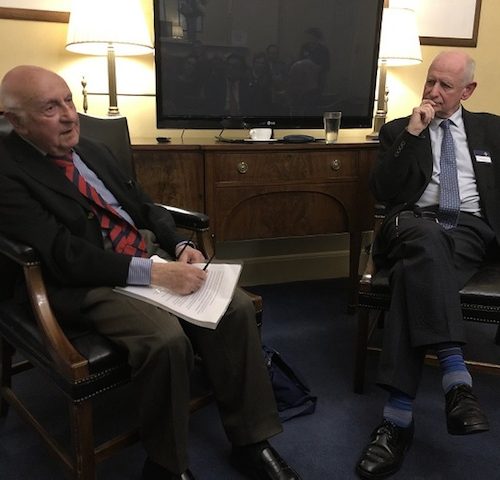 On 13th February Chambers had the pleasure of hosting an international seminar at which Judge Theodor Meron discussed his life in international law, in conversation with Steven Kay QC.

Judge Meron is a luminary of international justice. Born in Poland in 1930, his experience of Nazi occupation and Holocaust survival inspired him to a life and career in international law. In 1945, he emigrated to Palestine where he began his legal education which he completed at Harvard and Cambridge. First employed as a lawyer in the Israeli Ministry of Foreign Affairs, he became legal adviser in 1967 when he authored a now famous opinion which considered whether Israeli settlements on the West Bank violated the Geneva Conventions. Judge Meron worked in Israel for almost 20 years prior to emigration to the United States in 1977, where he joined NYU as professor of international law. In New York, he published Human Rights Law-Making in the United Nations (1986), Human Rights in Internal Strife (1987), Human Rights and Humanitarian Norms as Customary Law (1989), Humanization of International Law (2006), and two books on Shakespeare, chivalry, and war. In these works, Judge Meron argued for an integrated approach to human rights and humanitarian law by grounding both in general theory of international law. When he was appointed professor at the Graduate Institute of International Law in Geneva between 1991 and 1995, this facilitated his still ongoing work with the ICRC and provided him with the opportunity to further his argument for an integrated approach to humanitarian and human rights law, as well as to expand the applicability of protective norms to non-international armed conflicts.

In 1998, Judge Meron was invited to join the US delegation to the Rome Conference on the Establishment of an International Criminal Court. In Rome, he was involved in negotiating the Rome Statute’s provisions on war crimes and crimes against humanity. In 2001, he was nominated by the US – and elected by the UN – to be a judge at the UN war crimes tribunal at The Hague. At the ICTY, he delivered some of the tribunal’s most seminal jurisprudence, including in Krstić, which established that genocide can be committed even in a circumscribed geographical area, and Kunarac, which defined rape and sexual slavery as crimes against humanity. In 2003, Judge Meron was elected as President of the ICTY. Ultimately, he would serve four terms as President and, in December 2011, he was elected a Judge of the Mechanism for International Criminal Tribunals (MICT), where he served three terms as President. He has been visiting professor in Oxford since 2014 and is a visiting fellow in Mansfield College and an Honorary Fellow of Trinity College. Prior to that he was visiting fellow at All Souls. He is still a judge of the MICT.

Chambers would like to thank Judge Meron and the academics, solicitors and lawyers who attended.