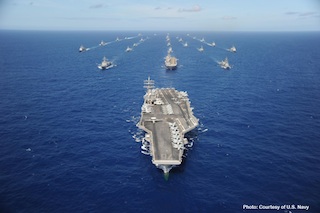 “National Power Projection from the Sea-Challenges and Opportunities”

David Hammond, of the 9 Bedford Row International Maritime Practice will be a speaker at the first RUSI International Sea Power conference, which will see international naval leaders, senior government and policy officials, industry, academia and other pertinent maritime stakeholders convene under the theme of ‘National Power Projection from the Sea – Challenges and Opportunities’ to discuss key issues in naval and maritime affairs for the coming year.

David will be speaking on ‘The Future of Private Maritime Security Companies’ and detailing the developments in the industry for soft law instruments and initiatives such as the 1OO Series Rules for the Use of Force (RUF) and the new Human Rights at Sea international initiative.

The conference will also launch the Institute’s Sea Power Research Programme, a three year initiative in conjunction with the University of Greenwich and King’s College London.

This event is the successor to the Institute’s flagship annual Future Maritime Operations Conference, which since its inception in 2004, became a major fixture in the international maritime calendar and regularly attracted a full house in excess of 200 participants.

Full programme can be found HERE

David Hammond leads the 9BRi Maritime Practice. He is the author of the 100 Series Rules for the Use of Force and founder of the Human Rights at Sea international maritime initiative.