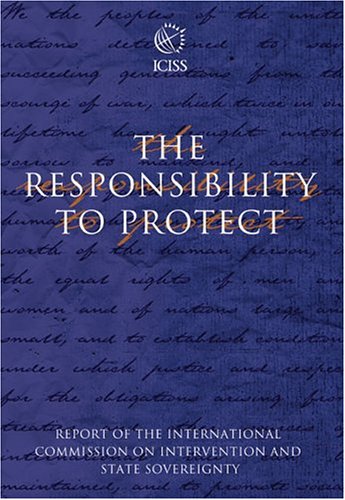 R2P, or the Responsibility to Protect, is a legal doctrine designed to prevent atrocity crimes by sanctioning the use of force in certain circumstances. Atrocity crimes are those the international community has deemed so serious that their commission is a threat to the international legal order. As such, jurisdiction over them is global and the obligation to prevent them non-derogable.

The problem is that, even more fundamentally, the legal order as it has existed since the 1648 Peace of Westphalia is based on the idea of untrammelled sovereignty and non-intervention, as enshrined in Article 2(7) of the United Nations Charter.

R2P therefore attempts to develop the law on the use of force in two important respects. First, to establish humanitarian concern as a stand-alone justification for intervention separate from that under Chapter VII (threats to international peace and security) and Article 51 (self-defence). And second, to establish a mechanism for sanctioning intervention outside of the UN Security Council, to be used when the Council is deadlocked, as it is with Syria now because of opposition from Russia and China.

In 2004, a UN High Level Panel recognised R2P as an emerging norm. Next, the UN General Assembly apparently endorsed the principle in its 2005 World Summit Outcome Document. Following this the Security Council also seemed to affirm the doctrine in Resolution 1674 on the Protection of Civilians in Armed Conflict and again in Resolution 1706 in the context of the Darfur crisis. R2P was most recently invoked in response to the 2011 conflicts in Ivory Coast and Libya.

It seems quite clear that Syria is now a prime candidate for application of the R2P concept.

Yet there remains much debate over exactly what parts of the concept are universally accepted. In short, the attempt to establish humanitarian concern as a stand-alone justification for intervention seems to be much more widely accepted than the mechanism to circumvent the Security Council.

However, General Assembly Resolution 60/1, together with Security Council Resolutions 1674 and 1706, and the World Summit Outcome Document, clearly indicate that the state signatories to them envisaged force being sanctioned via the UN, which must be read as meaning the Security Council. In none of the documents is there any explicit or implied recognition of independent action by a ‘coalition of the willing’. Even regional organisations are only mentioned in the context of cooperation with the UN.

True, there are the examples of the Economic Community of West African States’ intervention on humanitarian grounds in Liberia in 1992 and Sierra Leone in 1998 without prior Security Council authorization, which were later approved by that body. However, it is arguable that those were qualitatively different from acting with some members of the Security Council’s explicit disapproval.

On the one hand then it is worth looking to the origins of the Westphalian model to understand some of the uncertainty over R2P. The Thirty Years War that preceded it was a prolonged period of generalised European conflict based on a number of perceived rights to intervene, mostly held by competing Catholic and Protestant dynasties and their supporters. The chaos that ensued begot the Westphalian model, which was acknowledged as imperfect but necessary to guarantee order. The Security Council was a development on that model that uses its exclusivity and veto mechanism to guarantee order.

On the other hand, progressive ideas, into which category the R2P concept must fall, have historically had to compete with reactionary politics and law. The abolition of slavery is perhaps the best example, when many eminent jurists of the day deemed the Slave Trade Act of 1807 and Abolition Act of 1833 and the use of force that they sanctioned to be illegal. Yet those arguments proved to be on the wrong side of history.

The General Assembly Resolution of 3rd August 2012 condemning inaction in the Security Council must therefore be seen as a key development indicating that some members of the Security Council are currently on the wrong side of history over Syria. This goes more to legitimacy than legality. However, as law is ultimately an expression of power, what garners widespread legitimacy often evolves into the legal norm.