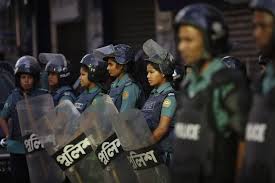 Summary of allegations may be accessed here:

LONDON AND THE HAGUE, 4th February 2014 – Today an application was made to the International Criminal Court in The Hague for an immediate investigation into the Bangladeshi Government for crimes committed against its civilian population prior, during and after the recent disputed elections of 5 January 2014.

The application was filed by lawyers from the London based chambers of 9 Bedford Row International, on behalf of the International Coalition for Freedom and Rights, an independent human rights organisation based in Europe, whose core membership includes highly regarded international war crimes experts. The application is a prima facie investigation mapped out for the Prosecutor, supported by extensive legal argument that adheres to the requirements of the ICC.

The legal team is offering the ICC assistance in identifying those most culpable for crimes against humanity, along with a detailed hierarchy of the Government of Bangladesh, Bangladesh Security Forces and Bangladesh Armed Forces. The application outlines extra-judicial murders committed by different arms of the Bangladeshi Government since first coming into power in 2009.

The application follows a turbulent period of political upheaval in Bangladesh. The coalition of opposition political parties boycotted the January poll after the refusal of the current government to install a neutral caretaker administration to oversee the vote.

The main Islamist Party, Jamaat-e-Islami, was barred from contesting the election and its entire leadership is in arbitrary detention. Opposition leaders have also faced execution for crimes allegedly committed during the country’s 1971 war. Independent legal experts have said the International Crimes Tribunal, created in 2010 by the government of Prime Minister Sheikh Hasina, falls well below the minimum universally accepted standards. It is also alleged that hundreds of opposition activists remain illegally detained or have disappeared in recent months.

Evidence is now emerging of widespread and arbitrary arrests of opposition activists, as well as continued extra-judicial killings, torture in police custody and enforced disappearances. Particularly concerning is the deaths of opposition activists in ‘crossfire’ – an explanation used by government forces for unintended deaths during raids on perceived ‘terrorist’ organisations.

Independent observers now attribute many of these deaths to deliberate killings by government forces of individuals already in custody. Human Rights Watch, on 27 January 2014, described an ‘escalation’ of killings in custody, and said Bangladesh was ‘spiraling into a human rights crisis.’

The communication to the ICC Prosecutor has gained unprecedented support form some of the world’s leading war crimes and human rights lawyers.

Steven Kay QC, head of the legal team, said: ‘Today we have supplied to the ICC what we believe to be convincing evidence that there has been planned and extensive criminal acts by the Bangladeshi Government on their own people. It seems a culture of impunity is inherent within the government and security forces. The Bangladesh Government has completely failed to halt or even investigate the scores of extra-judicial killings within the country since 2010. It is of deep concern that these killings are now accelerating in the election period. From the evidence that we have gathered, this human rights crisis in Bangladesh has been government sponsored. We hope the International Criminal Court will look carefully at what has been submitted to them today.’

Toby Cadman, a barrister and member of the ICFR, commented: ‘“This Communication provides compelling evidence of widespread and systematic attacks on the civilian population.  There are credible allegations of several hundred deaths at the hands of the Security Forces between 2010 and January 2014.  Despite numerous requests the Government of Bangladesh has failed to investigate or prosecute those individuals bearing greatest responsibility for these crimes. It is quite clear that the Government is unwilling and unable to genuinely prosecute these crimes.  The government is waging a dark and bloody secret war in Bangladesh’

John Cammegh, a member of the legal team, added: ‘Forty two years ago Bangladesh was plunged into a violent abyss from which she might not have recovered; yet since then Bangladesh has emerged as a constitutional, parliamentary democracy governing a secular, multi-cultural society with one of the fastest growing economies in the developing world. By seeking to rekindle old hatreds by targeting minority groups for its own ends the Awami League government has not simply betrayed the rule of the law; it has betrayed the entire Bangladeshi people by committing such crimes that, if unrestrained and unpunished, will inevitably return the country to chaos and despair.’

Lord Carlile QC, Vice-Chair of the UK Parliament’s cross-party group on Genocide and Crimes Against Humanity said: ‘The Government of Bangladesh has repeatedly and deliberately flouted international legal and juristic standards. This is a great disappointment. The allegations made to the ICC are compelling, and with deep regret I have formed the view that Bangladesh and senior government figures there should now be brought before the international criminal jurisdiction’

Sir Geoffrey Nice QC, former Prosecutor at the ICTY said: “In my experience prosecuting similar crimes of this nature, this application is certainly persuasive. I am extremely concerned by the nature of the crimes described, and by the Bangladeshi government apparent complicity in them.’

Sir Desmond de Silva QC, former Chief Prosecutor at the Special Court in Sierra Leone stated: “The application being made is one with a very great deal of force.  I urge the Prosecutor to consider the application with the utmost seriousness and in a timely fashion.  As a signatory to the Rome Statute the Government of Bangladesh has a duty to uphold fundamental principles that it has so far willfully ignored.”

Alison Smith, Legal Counsel of No Peace Without Justice, said “It is ironic that the Article 15.2 Communication comes as a result of the Government of Bangladesh abusing the rhetoric of accountability for crimes under international law in order to pursue narrow partisan aims. The Government of Bangladesh has consistently ignored the legitimate concerns and persistent demands of the international community, including official rulings by United Nations bodies, and did nothing to serve the interests of victims or their communities and hamper the chances for meaningful justice and reconciliation in the country.”

Ms. Smith added, “The Bangladesh ICC communication clearly demonstrates that for all the criticism that the ICC has been facing over the last year, Article 15.2 remains one of the most important guarantees of the Court’s independence. Whenever a situation develops where crimes under international law are being committed on the territory or by nationals of a State Party, the ICC constitutes the last bastion for redress. Whether or not the Bangladesh situation will lead to ICC indictments and prosecutions, the Government of Bangladesh needs to take this complaint seriously, as the allegations go beyond those of actions by the infamous Rapid Action Battalion, or the paramilitary Bangladesh Rifles (now renamed “Bangladesh Border Guard”), but calls into question the independence and impartiality of the entire judicial system, which is said to be used for narrow partisan aims.”

A summary of the application to the International Criminal Court, is available on the website of the ICFR’s legal team. Please use this link: