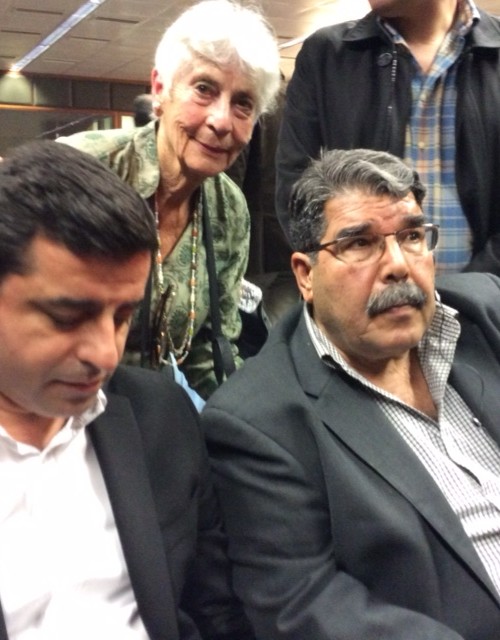 On 15th February in Athens, in the offices of the Greek Journalists Union, I joined some 400 people, Greeks, Kurds living in Greece and some who had come from Turkey to listen to an array of speakers including lawyers, writers, and the two Kurdish political leaders, Saleh Muslim, co chair of the Syrian Kurdish party, PYD, and Selahattin Demirtas, co-chair of the pro-Kurdish party HPD.

Demirtas had made 8 visits to Ocalan on Mrali Island before the crackdown last April, but there have been none at all for the past year. He described graphically the harsh conditions of Ocalan’s living conditions. His cell is 12 metres square, containing a bed, table, chair, and toilet with a basin. His outside exercise, when permitted, consists of walking around another 12 square metres courtyard contained between 4 walls 12 metres high, with no windows or views to the outside – just the sky. In summer,it is searingly, unhealthily hot and in winter icy cold.

Yet even in these brutal torturous surroundings, cut off from the outside world, this man (like Gramsci) has managed to write 20 books, explaining his philosophy, with profound references to the history of the Kurds and indeed of the human race. He explores the history of ideas, but always with a focus on the needs and roles of the people, their rights, especially the rights of women, as he formulates his proposals for self-administration and democratic autonomy that can bring about social justice. He is, declared many of the speakers, the Nelson Mandela of Europe and Imrali is Europe’s Guantanamo!

Demirtas criticises European politicians for their inability or refusal to have a long-term vision, and shed policies and attitudes that reflect their short-term political, commercial, and vested interests.

It was difficult for me to follow what was said as the only translation was Greek to Kurdish, save for my own presentation, when the interpreter did not get going till about my 2nd page!  But trying to make sense of it all, I got some notes from a French-Kurdish journalist, so here is what I could learn.

This was the first time that the anniversary of Abdullah Ocalan’s abduction, in 1999, from the Greek Embassy in Nairobi, into the hands of the Turkish authorities, with the assistance of the intelligence services of Greece, Kenya, the USA, and Israel, has been commemorated in this way.

But it was clear from all the speeches that the rapidly deteriorating situation in S.E. Turkey (Northern Kurdistan) is such that it can be justly described as a genocide. Turkey’s AKP party, under President Erdogan, has embarked on a relentless brutal war against not only his own Kurdish Citizens but the Kurds everywhere in Syria (Rojava) and in the KRG. He broke the peace process, tore up Ocalan’s “road map to peace” and seems to feel he can play off the US, and the UK, secure in the belief they will not stop his massacres.

Every speaker saw Ocalan as the key to peace, his release essential, and his imprisonment compared to that of Mandela on Robben Island, except under far worse conditions.

This Conference was organised as a prelude to the actual suit that will be heard in the Greek courts on November 4th.

The first session focused on the international legal context of the abduction, its background, Greece’s role in the conspiracy and a presentation on the facts of Ocalan’s status and isolation. Songul Karabulut, of the Kurdish National Congress, the KNK, described the many protests that condemned the abduction, in the course of which 64 Kurds immolated themselves, saw the USA, and the CIA as the most guilty, and saw the conspiracy of certain powers today to back Turkey, however it behaves, as a continuation of that conspiracy, and therefore time for the truth to be exposed, starting with Greece.

The eminent writer and political thinker Mihalis Xaralamnbilis, author of letters to Prometheus (Ocalan) on Imrali protested that the Kurds are a people, not a minority, who lost their rights to their cultural identity after the break up of the Ottoman Empire, when they were divided up between the 4 countries, Syria, Turkey, Iraq and Iran, and in all of these faced persecution, displacement, and oppression. He compared President Erdogan to Hitler, and sees Ocalan as a major figure on a par with Nelson Mandela.

The Greek lawyer Yannis Rahiyotis was certain that it is now imperative, in the interests of everyone in the region, not just the Kurds, for peace and reconciliation, that the murky details of the February 15th abduction are properly revealed. The move for this legal suit actually began in preliminary work in 2008.

I spoke about the perverse decision of the Grand Chamber of the ECtHR to skirt the issue of the kidnapping, and not determine it to be an “arbitrary arrest.”

This was a disappointing ruling considering how Ocalan was tricked, lured, into leaving the safety of the Greek Embassy, and having been drugged and blindfolded, possibly much sedated, delivered to the Turkish officials waiting for him by the plane. But their ruling that a death sentence was “torture” resulted in Turkey, at that time keen to be accepted into the EU, abolishing the death penalty and instead instituting ” aggravated life imprisonment”. It also found that Turkey breached many ECHR articles, as well as those enshrined in the UDHR, the ICCPR, and the Torture Convention, particularly the lack of a fair, independent and impartial court to hear the trial, rights to a lawyer, etc.

In the second session we heard the political speeches from the leaders, Saleh Muslim and Selahattin Demirtis. Both men praised the vigour of Ocalan, who in spite of long years of solitary confinement, and often periods when he was not allowed to see his family or consult with his lawyers, continues to preach the messages of peace, non violence, freedom of belief, pluralism, and gender equality as basics for democracy and justice. Both in Rojava (Syria) and in Northern Kurdistan, the ideology from Ocalan’s teaching is being implemented in concrete ways. His vision encompasses social justice for all, and  Rojava is now home to all ethnicities and religions. Turkmen, Copts, Christians, Alevis, and Assyrians.

Muslim and Demirtas were hurried quickly away as soon as the conference ended, for security reasons, I wished I had had a chance to talk to them, at least Saleh speaks English and I know and revere this good decent man, and admire greatly the Rojava initiative, having visited there several times.

Athens is bursting with refugees and migrants people are exhausted by the struggle to live decently with so many cuts and so much unemployment.

When in the space of 2 days I lost not one leather wallet with all my money and credit cards, and the next day again the new replacement purse and emergency money got through my bank, I blame myself for carelessness.

But the tourist police station in Athens sees about 40 tourists a day reporting pick pocket thefts. The police blame the refugees. But it might not be only them. With 50% youth unemployed, this sort of poverty can lead to crime. And the refugee burden is huge for a country already reeling under the austerity cuts, so all this weekend there were demonstrations and protest marches, including one organised by the Kurds!