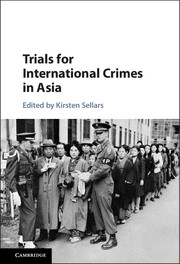 Trials for International Crimes in Asia

Kirsten Sellars teaches in the Faculty of Law at the Chinese University in Hong Kong and has put together a remarkable series of essays by authors of great expertise to chart the development from 1945 to date of international criminal trials in Asia. This part of the planet has been the least committed to the International Criminal Court, but there is a rich seam of international justice (both good and bad) mined in the region and it is important to have had it reviewed to provide us with a better understanding of eastern perspectives. The focus since the UN ad hoc tribunals were established in the 1990s has largely been upon western ideas and concepts in the composition of the modern day international courts, but these connected essays give us a different insight as to what the east considers important. In making such an assessment this book reminds us when we consider the failings of the past that not all, if any, contemporary courts make for happy reading, as the section on the Bangladesh International Crimes Tribunal “The tribunals in Bangladesh – Falling short of international standards” by Abdur Razzaq sadly proves. The political aspect of international justice has never been far away in any of the international courts be they in the East or West. Kirsten Sellers puts it this way “the formation of international criminal law was driven by concerns about security rather than justice”. Today you can explicitly inset the word “politics” into that sentence.

The great value of a book like this is the combination of historical fact that is served with the development of the essential strands of jurisprudence. This, after all, is the great attraction of international criminal trials – when momentous events in history result in criminal proceedings created not only to be a narrative but also to deal with vanquished opponents. Sellers herself reminds us in the first chapter of the key issue for many of the early international trials of the 20th century: the paradigm of a crime against international peace and order, being a treasonable conspiracy against the other states. The problem has been – how to ensure leaders could be indirectly held responsible for substantive crimes committed in war, because of their membership of an organization that had pursued a common plan? The answer for the victors came through a doctrine of complicity that had its own roots in the Moscow show trials of the 1930’s. It was the Russian jurist Trainin who supplied the essential ingredients of the argument used at both Nuremberg and Tokyo to prosecute groups of national leaders for committing aggressive war.

The value of this book comes from its analysis of the past and its juxtaposition with the present. This means the student, the academic and the practitioner can greater understand the issues involved. The big subjects of command responsibility, superior orders and joint criminal enterprise are particularly examined from their eastern origins. These subjects, like the complicity doctrine, are concerned with establishing liability of leaders for substantive crimes, the definitions of which are not found in the enabling instruments of their courts. Professor Robert Cryer of the University of Birmingham, examines with care the doctrine of command responsibility using as a base the Yamashita case. The many complexities of the doctrine are analysed and he points out were well understood in their context at the Tokyo Tribunal, but lessons from the past did not seem to have been learnt at the time of the establishment of the ad hoc tribunals and the ICC. Further insight into the doctrine is provided by Professor Rehan Abeyratne of Jindal Global Law School who analyses the issue in more detail in the chapter “Asia as the laboratory of the superior responsibility doctrine” turning the focus not only upon Yamashita but also to the Medina trial (My Lai massacre).

Moving to the subject of superior orders by Professor Bing Bing Jia of Tsinghua University, there is a dissection of absolute liability and conditional liability, whereby the latter provides mitigation for responsibility in sentence. To this day I remember clearly the day during the Tadic trial when the case of Erdemovic was interposed and wondering how the ICTY was going to deal with this issue. An earlier historical background to the subject from the East is provided by Professor Cheah Wui Ling, of Singapore University dealing with the superior orders defence as considered before the British Singapore courts established to try Japanese war criminals, with as their foundation the concept of honour in soldiery, which now seems a very quaint approach no longer found in international trials and certainly was not the perspective of the ICTY.

The controversial JCE doctrine with its roots in the Tadic Appeal Decision, is reviewed in two separate chapters: one by Professor Neha Jain of Minnesota Law School, the other by Professor Nina Jorgensen like Kirsten Sellars from the Chinese University, Hong Kong. Whereas, Professor Jain after setting out the doctrine moves to the controversial decisions at the ECCC, Professor Jorgensen concentrates upon the Asian context as found in Hong Kong, East Timor and Cambodia, but also Tokyo. The value of this approach exposes the many difficulties in the concept that not only troubles academics, but more particularly counsel who have to wrestle with facts.

Elsewhere in the book there are interesting chapters by: Lisette Schouten of Heidelberg University – “Colonial Justice in the Netherlands Indies war crimes trials”; Velentyna Polunina also of Heidelberg University – “The Khabarovsk trial: The Soviet riposte to the Tokyo Tribunal”; Professor Osawa Takeshi of Kumamoto Gakuen University – “The People’s Republic of China’s “lenient treatment” policy towards Japanese war criminals”; Tara Gutman of the Australian National University – “Cambodia 1979: trying Khmer Rouge leaders for genocide”; Professor Mark Cammack of Southwestern Law School – “Crimes Against humanity in East Timor: The Indonesain ad hoc Human Rights Court hearings”; Professor Rafiqul Islam of Macquarie University – “Trials for international crimes in Bangla Desh: prosecutorial strategies, defence arguments and judgments”. All in all this selection adds to the book so it is providing a very good read for the scholarship as well as factual context.