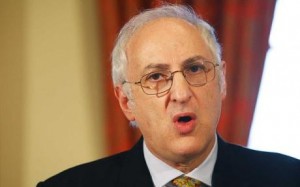 Commenting today, Lord Carlile said:
‘As an experienced voice on the subject of war crimes and human rights, I feel it is my duty to press for an urgent international response to this flawed process. The Bangladeshi Government has ignored the genuine concerns of the international legal community, as well as human rights organisations and governments. The judgment given today in the case of SQ Chowdhury shines another light on a legal process that is not fit for purpose. Witnesses were abducted and there have been proven cases of interference from the executive.
‘After each judgment, many hoped this tribunal would listen to the valid concerns of the international legal community. There has been no attempt at reform. The legitimacy of this court continues to diminish as the Bangladeshi government has ridden roughshod over fundamental legal norms.
‘At the UN General Assembly last week, Prime Minister Sheikh Hasina attempted to paint these trials as a noble enterprise. She argues they will bring justice and closure to victims of the terrible crimes committed in 1971. However, they will do no such thing. These tribunals have proved so divisive, and have been so poorly managed, they risk polarising Bangladesh for a generation and poisoning political debate before the elections. This may lead to significant unrest and instability on the streets, which will only be magnified at election time.
‘I am also alarmed about allegations the Bangladeshi Ministry of Law and Parliamentary Affairs formulated the judgment of SQ Chowdhury in May of this year. I have seen documents that suggest this may be true, although they must be independently verified. If proven true, they represent a profound breach of trust on behalf of the government.
‘Along with others in the legal community, I have already made representations to the United Nations on this matter. I will continue to press for an internationally supervised tribunal that can deliver real justice for Bangladeshis. I will also write to the Foreign Secretary and urge him to give this subject his urgent attention. As Bangladesh’s largest aid donor, it is now time to make a stand against such flagrant human rights violations.’
As reported at http://justiceconcern.org/?p=254