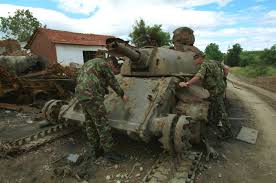 The Dutch Ministry of Foreign Affairs has today released a statement confirming that a tribunal will be set up in The Hague to try war crimes allegedly committed in Kosovo in 1999-2000, during and immediately after the Kosovo war.

The court will be made up of international judges and funded by the EU, but will be established under Kosovan law. According to the Ministry of Foreign Affairs proceedings will begin sometime this year.