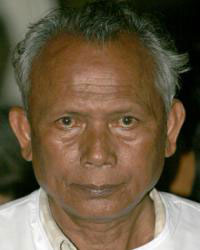 Former Khmer Rouge navy commander, Meas Muth, has been formally charged by International Co-Investigating Judge Bohlander at the ECCC, a UN backed tribunal in Phnom Penh. Previously charged in absentia by former International Co-Investigating Judge Harmon, some charges have now been rescinded and Meas Muth now faces charges of genocide, crimes against humanity, grave breaches of the Geneva Conventions, and violations of the 1956 Penal Code.

To learn more about Meas Muth and the crimes he stands accused of, click the links below: