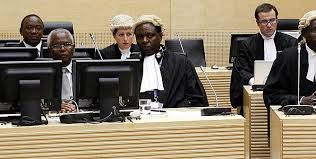 On 14 May 2013, the Defence for Kenyan President Uhuru Kenyatta submitted its “Observations on Estimated Time Required to Prepare for Trial”, requesting that Trial Chamber V of the International Criminal Court:

In the filing, Steven Kay QC and Gillian Higgins, the barristers representing President Kenyatta, argued that the Defence required until January 2014 to prepare adequately for trial due to, inter alia: the scale of Prosecution disclosure served after the Confirmation Hearing, and the concomitant need for the Defence to investigate witnesses with criminal backgrounds and significant credibility issues; the need for investigation into the credibility of, and substantive allegations made by, five Prosecution witnesses whose identities and unredacted transcripts of interview have yet to be disclosed; the fact that the Defence has used its own resources to carry out translations and transcriptions that the Prosecution was under a duty to complete; the recent service of an updated Pre-Trial Brief and Document Containing Charges; and the recent disclosure of the identities of further “person[s] of great notoriety” who “have the incentive for personal gain to concoct false evidence and provide false witnesses against the accused.“

In terms of the extent of post-Confirmation Hearing disclosure, the filing highlighted the fact that the majority of all incriminatory evidence against President Kenyatta was provided to the Defence after January 2013, stating “from 4 January 2013 until 10 May 2013, the Prosecution has disclosed 12,706 pages of evidence and 70 audio visual files with a total duration of 16 hours 51 minutes and 17 seconds. 57.3 per cent of all evidence categorised by the Prosecution as incriminatory was disclosed after 1 January 2013. Transcripts of evidence of 11 trial witnesses were disclosed to the Defence for the first time only in January 2013.“ The Defence further stated that “[i]n order for the Defence to ensure that President Kenyatta’s right to a fair trial is upheld, the Defence requires approximately six months from the date of final unredacted disclosure by the Prosecution in order to prepare fully for trial.”

The Defence also drew the attention of the Chamber to the impact of the continued non-disclosure of the identities of five key Prosecution witnesses. President Kenyatta’s lawyers argued that “[t]he potential significance of this evidence is demonstrated by the Prosecution’s allocation of 46 hours for examination-in-chief in respect of [these] witnesses.”

In addition to raising other issues relating to the timely disclosure of evidence, the Defence – referring to its recent application to have the case terminated, stayed or referred back to the Pre-Trial Chamber for reconsideration pursuant to Article 64(4) – argued that the “case against President Kenyatta is riddled with corrupt and false Prosecution witnesses”. The Defence concluded by stating that the previous conduct of the Prosecution and its witnesses “supports [its] contention that there has been false evidence tendered upon which the Court has based its decisions.”

The Prosecution has until 4 June 2013 to submit its response.