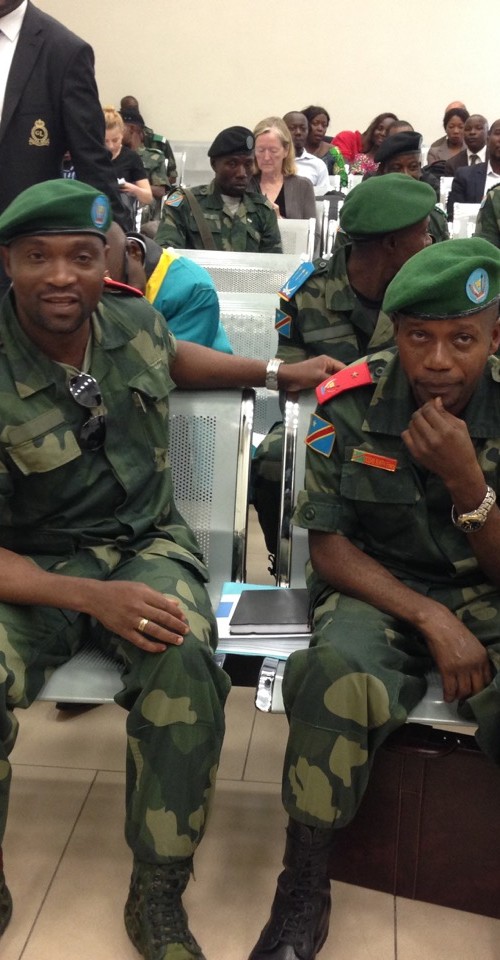 Germain Katanga (pictured, left) is produced today before the Haute Court Militaire, Kinshasa in the Democratic Republic of Congo (DRC) to respond to charges alleging war crimes and crimes against humanity allegedly committed in Eastern Congo in 2002-2005. David Hooper Q.C, who represented him at the International Criminal Court attended as an observer.

Germain Katanga, who was a militia leader from 2003 until his induction into the DRC army in 2005 (as Brigadier General – hence the red tab and star) was transferred to the Hague in 2007 to stand trial for similar offences. At the time the DRC authorities said that all the charges in DRC had been closed. He was tried at the Hague at the request of the DRC. After a lengthy trial process, Mr Katanga was convicted at the ICC and sentenced to 12 years imprisonment, a sentence modified in 2015 so as to allow his release on 18th January 2016. Mr Katanga asked to serve the remainder of his sentence in his own country and was transferred back to DRC in December. He was not released on January 18th. Instead he has been informed of the DRC’s intention to charge him with further offences.

The Haut Court Militaire – comprised of a tribunal of five generals – adjourned the case for two weeks pending further submissions and information.

Meanwhile, under Article 108 of the Rome Statute, the DRC must get leave to prosecute him from the Presidency of the ICC for offences committed before he was sent back to DRC. The Presidency comprises the ICC President, and the first and second Vice President.

It is hoped that, in the circumstances, the Presidency will decline to allow the ICC to further prosecute Mr Katanga. Otherwise, why send him to the ICC for trial at all?