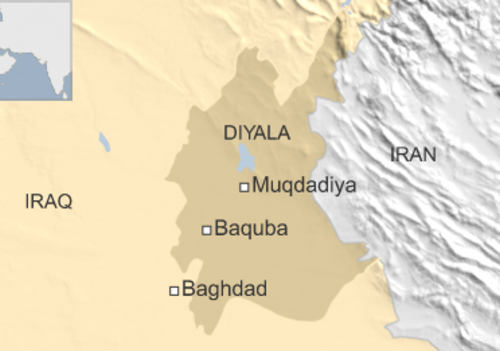 ISIS is claiming responsibility for two consecutive bombings at a café in the central Iraq town of Muqdadiya, around 130 kilometers north of Baghdad. The assault took place on Monday 11th January and an estimated 26 people were killed, many of whom were Sunnis. Sunni homes, shops and Mosques are all said to have been destroyed in the attack.

“Again civilians are paying the price for Iraq’s failure to rein in the out-of-control militias,” said the deputy Middle East director at Human Rights Watch, Joe Stork. “Countries that support Iraqi security forces and the Popular Mobilization Forces should insist that Baghdad bring an end to this deadly abuse.”

In the article below, Human Rights Watch states that: ‘deliberate killing of civilians and looting and unjustified destruction of civilian property when committed in the context of an armed conflict are serious violations of international humanitarian law, which is applicable to all parties fighting in Iraq, and may amount to war crimes.’