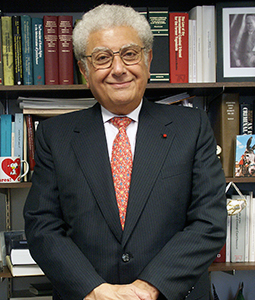 On 25th September, Mahmoud Cherif Bassiouni, one of the most influential international criminal law professors, died at his Chicago home aged 79 due to complications from multiple myeloma. Often described as “the father of international criminal law,” he helped to set up the International Criminal Court (ICC) in 1998 after having spent much of his career investigating human rights violations and crimes against humanity including torture, war crimes and genocide.

Professor Bassiouni was clearly dedicated to not just fighting injustice but to also teaching others how to combat it. Not only was he a founder of the International Human Rights Law Institute at DePaul University but in 1972 he also founded the Siracusa International Institute for Criminal Justice and Human Rights in Sicily. He was also able to share his legal knowledge through his extensive writing on subjects such as citizens’ arrests, juvenile delinquency and international extradition.

Since 1975, Professor Bassiouni held no less than 22 positions at the United Nations, including Chair of the Drafting Committee of the Diplomatic Conference on the Establishment of an International Criminal Court (1998), among other notable positions. He received ten honorary degrees and was awarded 16 medals from eight different countries. In 1999, Professor Bassiouni was nominated for the Nobel Peace Prize because of his strong dedication to upholding international criminal justice and especially his support of the International Criminal Court.

M. Cherif Bassiouni is survived by his wife, stepdaughter and two grandchildren.

Attached below is an emotional piece written by Cherif Bassiouni himself during his final days, intended as a farewell to those who knew him.

From God we come and to God we return

To learn more about Professor Bassiouni and his life and career, click the following links:

And click below to read the official statement from the International Criminal Court on the passing of Mahmoud Cherif Bassiouni.