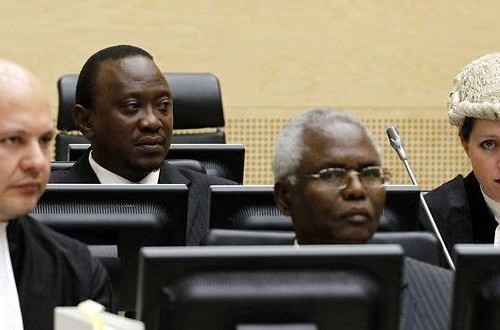 At yesterday’s status conference in the case of Muthaura et al, ICC Chief Prosecutor Fatou Bensouda sought to withdraw the charges against Kenyan accused Francis Muthaura. Bensouda’s decision would leave Uhuru Kenyatta, the recently-elected Kenyan President, as the only remaining accused in the “Kenya 2” case. Following an urgent request to address the Chamber at the start of the hearing, the Prosecutor stated in open court that she had “filed…a notice withdrawing the case against Mr Muthaura. Bensouda stated there was not “sufficient evidence to prove the charges against Mr Muthaura beyond a reasonable doubt…” The Prosecutor said the decision to withdraw the charges was due to, inter alia, “limited assistance” from the Government of Kenya, the unavailability of previous Prosecution witnesses, and the fact that “it came to light after the confirmation hearing that a critical witness for the Prosecution against Mr Muthaura had recanted part of his incriminating evidence…”

The Chamber stated that in light of the Prosecutor’s announcement, the case against Mr Muthaura could not proceed.

With reference to the fact that Bensouda charged Mr Kenyatta and Mr Muthaura as indirect co-perpetrators, the Chamber requested that the Prosecution provide written submissions on the impact upon the case against the President-elect in light of the withdrawal of the charges.

“This development this morning is presented to you in a way of responsible prosecution. It is anything but responsible prosecution that has gone on in this case. Let’s face the fact, this Confirmation of Charges hearing was determined upon false evidence, evidence that was concealed from the Defence, and the facts underlying the charges have been put utterly and fully in doubt. Let us consider the matter now. The Kenyatta case has been put into this Court on a series of allegations and charges that at the time we said were fundamentally flawed. We were in this courtroom for three weeks telling the Pre-Trial Chamber about that matter. We were ignored. We were overridden. The Prosecution have now conceded, in relation to one accused, the withdrawal of charges. They know the impact of their decision if it was also applied to Mr Kenyatta, and for that reason you are dealing with a Prosecutor that has tried consistently and in the teeth of the evidence to try and put a case before you based upon bad evidence, and the practices that have gone on in relation to the Confirmation of Charges hearing have been utterly shameful and the conduct thereafter…the Prosecution know exactly the fate of their case. It’s attempted to be dressed up in front of you in relation to other issues, but they are a mere smokescreen…“

At the hearing, the Chamber scheduled a further status conference for Monday 18 March in order for the Kenyatta Defence to present further submissions in response to the Prosecution’s written filing.

“The Defence submits that the non-disclosure was not an innocent “oversight” or “error” of a junior “reviewer”, as the OTP indicates. The truth of the matter is that the former Prosecutor, Mr. Luis Moreno Ocampo, the Senior Trial Lawyer Ms. Adesola Adeboyejo and Trial Lawyer Mr. Adeniran Akingbolahan were all fully aware of the existence and presumably the content of the document even before the issuance of the Summons, and at every stage of the proceedings up to this point. The Defence submits that these individuals were directly involved in withholding the exculpatory Affidavit. This is a grave act by the most senior members of the OTP, to the prejudice of Ambassador Muthaura and the fairness of proceedings against him, which, as the OTP concedes, requires the case against him to be reassessed.”