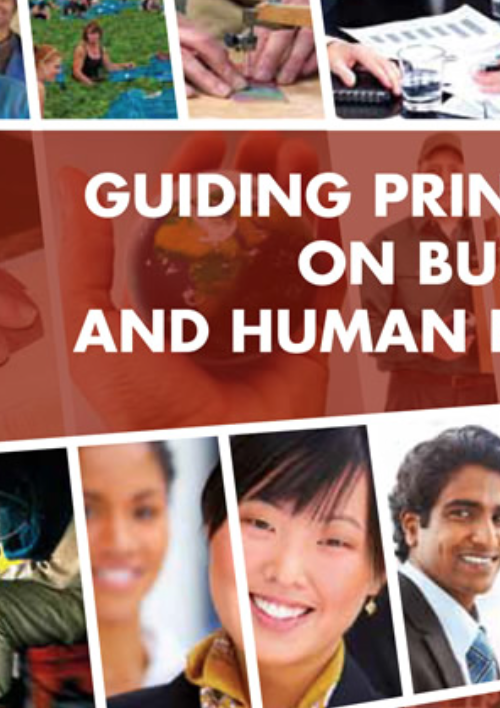 The UN Guiding Principles on Business and Human Rights

The IBA Conference provides an international platform for discussion across multiple legal disciplines including the expansion of the discussion concerning business and legal implications of the UN Guiding Principles on Business and Human Rights (UNGPs). This is an area of emerging business policy, best practice and legal development that is as equally applicable within the likes of the extractives industry where it has already been comprehensively applied, as it is in the maritime industry, where comprehensive engagement with the UNGPs has yet to be implemented.

The showcase seminar commenced with a video presentation from Professor John Ruggie, the author of the UN Guiding Principles in discussion with Mr. John Sherman III, General Counsel and legal advisor to the Shift Project, a project whose vision is “A world in which companies have the awareness, motivation and skills to know and show that they are respecting human rights”. The issue of engagement by corporate lawyers in the development of the UN Guiding Principles was raised and discussed in response to the query of “What is the role of in-house and corporate counsel”?

Corporate Social Responsibility in the maritime industry: A lawyers role?

Corporate Social Responsibility (CSR) is the responsibility of all directors and employees within a company, including, but not limited to suppliers in the associated supply chains. It is a facet of business that often sees such issues being either passed to, or being seen as naturally resting with the in-house lawyer or legal department. But is the involvement of a lawyer an advantage or a hindrance in the implementation of CSR policies in relation to implementation of the UNGPs?

It is advanced that engagement by corporate counsel in the development of the UNGPs should be encouraged at least, and where applicable internally mandated at best.

Corporate counsel have direct access to the Boards, have opinions that are valued, view issues from an analytical and contextualized position within the bounds of their business and often have the experience of the application of private company, corporate law, licensing and securities regulations as applicable to corporate business.

Engagement, however, often hinges on the lawyers’ opinion of whether or not they should be proactive in their duty to their employer / client, or if they work on the basis of reactive positioning either out of personal choice, or as determined by often restrictive bounds in their terms of employment.

The application of the second UNGP pillar is not a strict legal requirement, though lawyers should at the very least pay attention to its scope and content. This is especially pertinent for those lawyers who see their job as being proactive, in order to avoid material issues and thereby prevent litigation arising against their company at the first instance.

How does one avoid getting into trouble as a maritime entity over the emerging requirement for application of the UNGPs?

Firstly, an understanding of how the maritime industry collectively undertakes CSR needs to be made clear through appropriate maritime bodies such as the IMO and shipping associations. Thereafter, an understanding of one’s own company CSR policy and conduct in terms of safeguarding human rights provisions under the UNGPs such that issues can be prevented before they occur, is a proactive stance that has previously been underestimated in its effect. This should be the starting point.

The costs of avoiding conflict with flag state legislation, local communities where ships operate, local governments and civil society human rights organisations engaged with the UNGPs by way of example, goes not just go to corporate reputational management, but to undertaking best practice in terms of application of the UNGPs and transparent business. In short, use of the UNGPs should be part of smart business practices.

Assuming, however, that maritime companies are engaged with the UNGPs already have policies in place for human rights training, education and awareness; what about the availability of effective reporting and assurance mechanisms?

Reporting of non-financial issues, including reporting human rights abuses in the commercial environment is an expanding area of CSR accountability. It is an aspect that has been taken up, not just on a voluntary basis within some areas of the maritime and wider business community, but as a result of the emerging legal requirement backed by growing national and international legislation.

For example, both English legislation in terms of the UK Companies Act and the European Union (EU) have now adopted a legal requirement relating to non-financial reporting. This is an emerging legal requirement, though notably UNGP reporting and assurance mechanisms in the maritime industry are yet to comprehensively exist, nor have been championed as part of transparent business practices.

At the very least and as part of an businesses functional responsibility and ethical stance, the use of the likes of internal Compliance Review Board meetings in order to report and assure that human rights protections are engaged and mandated in day-to-day operations in which abuses are most likely to occur, should be adopted as a core business practice. There should also be auditable confirmation that the UNGPs are implemented and in all jurisdictions that the business operates.

Assisting maritime businesses to understand and embed in their culture compliance with the UNGPs as best practice, should now be properly considered across the industry. This is especially so for companies who regularly go to market to raise capital, seek shareholders support for expansion activities and engage in new contracts with explicit human rights clauses which have been specifically inserted for compliance with the UNGPs.

The role of lawyers in the Reporting process

Noting that non-financial reporting is now an increasing legal requirement in many jurisdictions, how have lawyers reacted to a requirement of accounting for, reporting and providing advice as to remedies for abuses?

Initial responses have anecdotally reported lawyers historically advising clients not to put any information into the public domain against which they can be sued. Nonetheless, this protectionist stance is slowly being challenged; not just by lawyers, but by clients.

Recently, the concept of undertaking adequate human rights due diligence practices in order to prevent litigation, is increasingly being advised to clients and favoured by lawyers. This is reflecting the ever-increasing trend of business transparency by companies wishing to be seen to be undertaking clean business, and thereby supporting use of the likes of the UNGPs.

In direct contrast, the failure in prediction of a serious adverse commercial consequence that results in a company being accused of human rights abuses at best, and at worst being held accountable for human rights abuses, is increasingly being viewed in-house as unacceptable and arguably reckless. As a result, the failure to integrate the UNGPs into everyday commercial business is now being viewed by many lawyers and clients alike as too great a commercial risk to take.

Avoidance, ignorance or inadequate in-house CSR provisions relating to use of the UNGPs potentially open up a company to a risk of reputational damage and/or costly litigation through failures to operate in a transparent manner and thereby being held to account by third parties for such failures. In short, voluntary and proactive application of the UNGPs can only be beneficial to businesses.

A binding Business and Human Rights Treaty: the call of June 2014

In June 2014, the sharply divided UN vote by the Human Rights Committee as to a treaty relating to business and human rights further raised the issue of the development of a new mechanism to enforce the UNGPs throughout the business and international community.

As the former UK diplomat, founder and President of the Shift project, Caroline Rees recently stated “…putting the UN Guiding Principles into practice remains the only practical way forward and the imperatives for doing so grow unabated. A good treaty may add to them. A bad treaty will not reduce them”[1].

Whether or not such a treaty will gain traction and momentum is yet to be seen, but companies need to take notice of the UNGPs at the very least. Such a treaty would, if implemented, clearly affect all businesses interested throughout the maritime industry.

Should lawyers wait until a legal requirement is established in international law before acting to support the UNGPs?

It is argued, not. The use of lawyers with contextualized expertise who support the concept of the UNGPs is key to keeping the current attention on the development of model reporting and assurance documents, related implementing policies and protocols for business to effectively implement the UNGPs in their daily activities.

The following is a short selection of focused questions that should be raised within a company in order to assess the understanding of and capacity for engagement of the UNGPs.

David Hammond is a barrister at 9 Bedford Row International and the Founder of the London-based Human Rights at Sea Organisation, a private not-for-profit organisation whose aim is to “raise the profile, awareness, implementation and accountability for human rights protections throughout the maritime industry, especially where they are currently absent and being abused“.