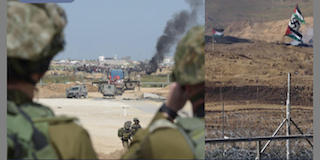 The High Level Military Group today published a report, “Smoke & Mirrors: Six Weeks Of Violence On The Gaza Border”, on the recent violence along the border with Israel. The report provides an in-depth assessment of the evolution of what is argued to be Hamas’ strategic concept in its war on Israel, after the failure of missiles and terror tunnels, and forms part of the High-Level Military Group’s ongoing project to assess the impact of Western armies facing enemies deploying terrorist tactics, including the war crime of using of protected persons as human shields.

The report’s author, Colonel Richard Kemp, was Commander of British Forces in Afghanistan and has served in Iraq, the Balkans, South Asia and Northern Ireland as well as leading the international terrorism team at the UK’s Joint Intelligence Committee and serving as chairman of the strategic intelligence group for COBRA.

Colonel Kemp draws attention to Hamas’s concealment of its “aggressive manoeuvring on the Gaza border”, determining it to be a strategy that has no viable military purpose, but rather seeks to deceive the international community into criticising a democratic state defending its citizens. Hamas’ actions, the report indicates, are carefully planned and orchestrated tactical operations by a terrorist organisation intending to break through the border of a sovereign state and commit mass murder in the communities beyond, using their own civilians as cover.

The report indicates that the timing of this aims to achieve maximum violence at the Gaza border on 14 and 15 May, coinciding with the 70th anniversary of the declaration of the State of Israel, the opening of the US embassy in Jerusalem, and the start of Ramadan.

The report is available in full here: http://high-level-military-group.org/pdf/hlmg-smoke-mirrors-six-weeks-violence-gaza-border.pdf