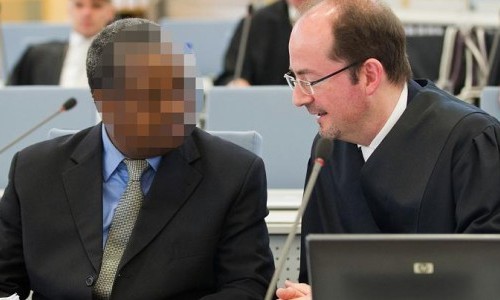 On 5 December 2014, the German High Court in Duesseldorf convicted three German citizens for links to the Democratic Forces for the Liberation of Rwanda, known by its French acronym FDLR, an ethnic Hutu militia operating in the Democratic Republic of Congo (DRC). The FDLR was dedicated to the overthrow of Rwanda’s government and is composed of former members of the country’s military and Hutu militia and considered partly responsible for the 1990s genocide in Rwanda.

The case against J.B.U. and the two other suspects was the first time that a German High Court issued a ruling in relation to the FDLR and is therefore considered a milestone for the German judicial system.

In its judgment the High Court found that the FDLR was a “well-organized, extremely powerful and, therefore, especially dangerous terrorist organization” operating in Eastern Congo. However, in this case the court found that the accused had aided the group’s campaign of murder, rape and recruitment of child soldiers while living in Germany.

The court found that in 2011 and 2012 the two main suspects had posted rebel propaganda on the internet and were therefore considered as effective members of the FDLR. The court sentenced the two men to four and three years in prison, respectively.

After 92 trial days and 35 witnesses heard, the High Court Dusseldorf followed Dieckmann’s final submission that the Prosecution did not prove beyond a reasonable doubt that J.B.U. was ever a member of FDLR. J.B.U was hence only convicted for supporting the group and was sentenced to a two-year suspended sentence for supporting the group.

J.B.U. had been provisionally released on 28 February 2013 by the German Federal Court of Justice based on a Request for Provisional Release submitted by Jens Dieckmann and remains free after the Judgment issued on 5 December 2014. Furthermore, the arrest warrant has been revoked.

This German case is closely related to the ICC Case against Callixte Mbarushimana, the former General Secretary of the FDLR. On 16 December 2011, ICC Pre-Trial Chamber I decided by Majority to decline to confirm the charges in the case of The Prosecutor v. Callixte Mbarushimana ICC-01/04-01/10 and to release Mr Mbarushimana from the custody of the Court.