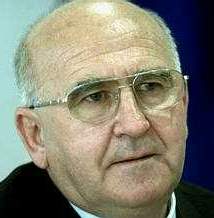 Borislav Paravac (pictured), 72, a former Serb member of Bosnia’s tripartite presidency has been charged in Bosnia with committing war crimes and crimes against humanity against Croats and Muslims during the country’s 1992-1995 war.

Paravac, along with three other Bosnian Serbs, stands accused of having committed “systematic attacks” against the Croatian and Muslim population in Bosnia between 1992-1993.

Click the link below to read more about this story: