Between 4 and 6 December 2019, the Appeals Chamber of the International Criminal held hearings in the Afghanistan situation following the appeal by the Prosecution of the 12 April 2019 PTC II decision not to authorise the opening of an investigation in the situation on the basis that there were substantial reasons to believe that it would not be in the interests of justice to do so. The PTC decision also raised issues of jurisdiction and in relation to the scope of the any potential investigation.

On 15 October 2019, Steven Kay QC, Dov Jacobs and Joshua Kern of 9 Bedford Row filed a request to appear as Amicus Curiae on behalf of the following organisations: the Jerusalem Institute of Justice, the International Legal Forum, My Truth, the Simon Wiesenthal Center, The Lawfare Project and UK Lawyers for Israel. The request was accepted on 24 October 2019.

During the hearings, the Appellate Judges heard from Joshua Kern and Dov Jacobs on a number of important points relevant to the appeal. Dov Jacobs, on the 4 December 2019, argued, among other issues, that the ICC was not permitted to exercise jurisdiction against nationals of non-State parties absent the identification of a permissive rule of customary international law to that effect specifically applicable to the relationship between the ICC and non-State parties. He also provided a comprehensive analysis of the jurisdictional provisions of the Rome Statute and their scope; Finally, he called for the voices of affected communities to be heard in Court in order for the Judges to hear all aspects of a given situation in order to reach an informed decision.

Joshua Kern, the next day, explained that the scope of the exercise of jurisdiction was a factor to be taken into account for the discussion on interests of justice. Joshua explained why it was open to the PTC take into account the prospects of State cooperation and the availability of evidence in its interests of justice assessment. He further argued that the principle of comity should be considered in determining whether an investigation involving a non-State party national absent Security Council imprimatur would not be in the interests of justice. The appeal process had demonstrated that all the participants agreed that it was in the interests of justice to determine jurisdictional issues at the earliest stage. This principle had to extend to the personal precondition to the exercise of jurisdiction. Prospects of State cooperation were by no means a given in the event of a decision to proceed, even in States Parties when surrender was opposed by a non-State Party.

The pleadings were concluded with an invitation to the Appeals Chamber, should it not be minded to dismiss the Prosecution’s appeal, either to remit the issue of jurisdiction to the Pre-Trial Chamber or adjourn the proceedings before permitting argument from participants on the critical issue of whether the exercise of ICC jurisdiction over nationals of non-States Parties is permitted.

Joshua Kern’s and Dov Jacobs’ interventions can be seen here. 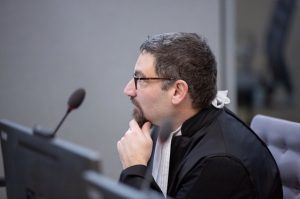 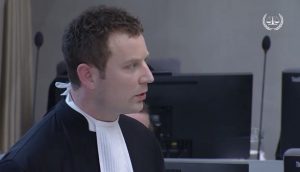