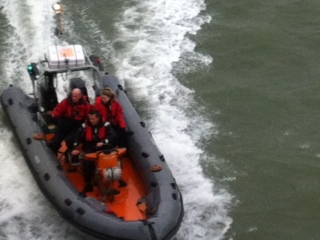 Hosted by CEO Nick Davis, the team observed a series of advanced software simulated maritime emergency situations taken from existing GoATG security team training packages, in order to consider real-time command and control issues and the application of the 100 Series Rules, Rules for the use of Force (RUF) in the maritime environment. They also took part in a practical piracy simulation exercise involving simulated Somali skiff attacks in the Solent whilst transiting between Lymington and Yarmouth in order to experience first-hand, the reality of timely decision-making processes of embarked security team leaders and personnel when faced with the use of reasonable and necessary force in order to deter violence at sea as against merchant vessels.

GoAGT Ltd provides proven safe passage and ship security protection to some of the world’s largest and most respected shipping companies principally operating in the Indian Ocean, but also worldwide.