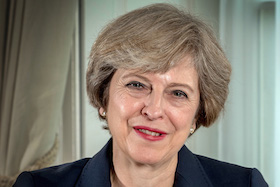 The UK Prime Minister is being urged to clarify her position on whether Britain should commit to staying in the European convention on human rights after it has left the EU. One unnamed senior Conservative MP has told The Guardian newspaper that he and some of his colleagues are becoming “increasingly nervous” that Theresa May could be so sure of an election victory this June that she might try to get a mandate for leaving the convention.

The European convention on human rights is a postwar treaty that was formed after World War II which sets out numerous rights and freedoms, and is separate from the European Union. In the past Theresa May has said that the treaty “can bind the hands of parliament, adds nothing to our prosperity [and] makes us less secure by preventing the deportation of dangerous foreign nationals.” However since becoming Prime Minister in 2016 May has not yet tried to leave the convention, recognizing that she does not have the parliamentary majority to carry out a withdrawal.

James Dobson, a researcher at Bright Blue, a liberal conservative thinktank expressed that May should keep the position that she held throughout her leadership race last year when she claimed that she would not try to remove Britain from the treaty. Dobson has said that, “the European convention on human rights is a vital document – written and championed by Conservative politicians after the atrocities of world war two – that promotes freedom and provides protection to people across Europe. These freedoms and protections include the rights of gay and lesbian people, the rights of the media against state censorship, more effective prosecution of domestic violence, and the rights of illegitimate children. Britain must remain a proud signatory of it.”

Whilst the Brexit secretary, David Davis, said earlier this year that there were no plans to withdraw from the convention, the impending general election may have changed this, and nothing can be made certain until clarification is given by the Prime Minister herself.