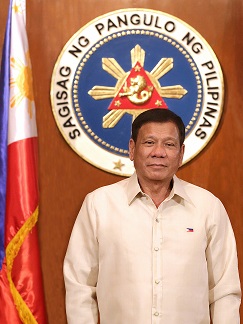 A complaint has been submitted before the International Criminal Court against the President of the Philippines, Rodrigo Duterte (pictured), accusing him and 11 other national officials of crimes against humanity and mass murder.

Lawyer Jude Sabio filed the complaint that states that President Deterte “repeatedly, unchangingly and continuously” committed extra-judicial executions or mass murders over three decades that amount to crimes against humanity. The communication states that 9,400 people have been killed in total as part of a “war on drugs” that the President has been waging since before he took office 10 months ago, starting in 1988 when he was mayor of Davao.

The communication is based on a variety of sources among which include the reports of human rights groups, the President’s own public remarks and testimony from those who reportedly carried out the killings whilst under orders from Duterte.

In relation to the complaint, the Office of the Prosecutor for the ICC has said in a statement that, “We will analyse it as appropriate. As soon as we reach a decision, we will inform the sender and provide reasons for our decision.” Meanwhile, a spokesperson for President Duterte claimed that the filing is a “cynical effort” to undermine the President.

To read about and this story in more detail, click the following link:
https://www.theguardian.com/world/2017/apr/25/mass-complaint-launched-against-philippines-president-duterte-at-icc

Click below to read a statement on the situation in the Republic of the Philippines released in 2016 by the Office of the Prosecutor for the ICC:
https://www.icc-cpi.int/Pages/item.aspx?name=161013-otp-stat-php