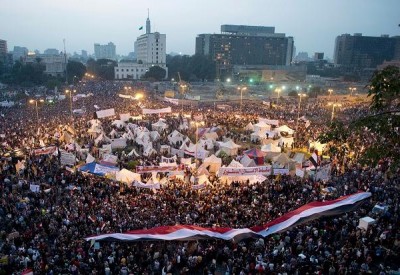 Egypt expects fresh protests today as opposition groups gather outside the Presidential Palace in Cairo to continue with their stand against the draft constitution.

These protests come after President Morsi showed no signs of compromising on the decree that was issued on 22 November, which granted him sweeping powers and stripped the judiciary of their right to challenge his decisions.

Morsi has been accused of consolidating power for himself and the Muslim Brotherhood. Critics say the draft was pushed through parliament without proper consultation and that it does little to protect political and religious freedoms or women’s rights.

Clashes are feared as protests become increasingly violent. Egyptian newspaper Al-Misri al Yawm has reported that in the early hours of this morning petrol bombs were thrown and shots fired at opposition demonstrators who had camped out in Tahrir square. Nine protestors were wounded and another suffered a head injury.

After the attack, police cars were deployed around the square for the first time this month. Correspondents say the police force has been weakened since the fall of former President Hosni Mubarak. These allegations arose after the police failed to intervene when anti-Muslim Brotherhood protesters ransacked the Islamist movement’s Cairo headquarters last week.

US President Barack Obama has expressed his deep concern over the violence in Egypt and has welcomed talks with Mursi, though he has stressed that these should be “without preconditions”.

Morsi contends that he is trying to safeguard the revolution that overthrew Hosni Mubarak last year. However protestors are accusing him of acting like a dictator. Mohamed El Baradei, Nobel laureate and chief co-ordinator of the opposition National Salvation Front movement, has stated that the “sham” draft constitution defied Egyptians’ “basic rights of freedom”. He further said, “It doesn’t establish proper democratic systems, so at this stage at least we have decided that we are going to continue to fight tooth and nail against the referendum.”

Critics say they hope that today’s turn out will persuade Morsi to seek a consensus through dialogue on a proper democratic constitution.