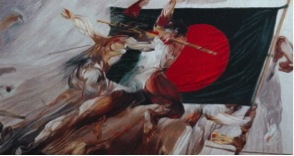 Monday 9 December 2013
London-Based Defence Team for Abdul QuaderMollah condemn the death sentence following trialand appellate proceedings in which the defendant was subjected to a trial constituting a flagrant denial of justice.
Defence Team calls for internationally supervised inquiry into the conduct of the trial and appeal process

A Farce and a Mockery of Justice: Defence Team Responds to the recent decision of Bangladesh’s ‘International’ Crimes Tribunal.

Today, Bangladesh’s International Crimes Tribunal issued a warrant of execution against Abdul Quader Mollah.They defence team repeats that the Tribunal has been characterised by widespread judicialand prosecutorial misconduct. They continue to cite clear evidence of witness tampering,witness perjury, governmental interference and collusion. They also point to the manner in which human rights monitoring bodies such as Odhikar and Human Rights Watch have been targeted is indicative of the vindictive approach of the current Government.
Commenting, Steven Kay QC stated: ‘The Government of Bangladesh claims that theTribunal has been established to bring an end to a culture of impunity, but it is the Government that continues to act with impunity. The only suitable response is aninternationally supervised tribunal.’
Commenting, Toby Cadman stated: ‘It now seems we are entering the final chapters of atawdry and shameful episode for Bangladesh. Its International Crimes Tribunal was set up tobring justice to the victims of the 1971 Independence War. However, it is now very clear the Awami League Government of Sheikh Hasina hijacked the process so it could destabilize itsopponents under the guise of ‘justice’.
Commenting, John Cammegh stated: ‘The Mollah case epitomises the manner in which thesetrials have been conducted. Albeit forty years on, properly conducted trials might have achieved great things. But there is surely no point in seeking justice unless it is fairly applied:the government’s relentless pursuit of leaders of Bangladesh’s largest Muslim party, Jamaat-e-Islami, resembles a Stalinist purge. The ICT has polarized rather than united the nation, reigniting chaos that has left hundreds dead since it opened in 2011.’
The case that risks plunging Bangladesh into the political mire was also one of its mostflawed. Originally, Abdul Quader Mollah was convicted and sentenced to life imprisonment.This was before the Prime Minister rushed through an amendment to the law that would allow  the Prosecution to appeal against the sentence and seek the death penalty. Simply put, the government interfered with a judicial process to ensure Mollah could be executed. Meanwhile,the Prime Minister promised in parliament that she would make direct representations to the judges to make sure they fully understood their new responsibilities.The evidence that convicted Mollah was also representative of the systematic and repeated injustices handed out to the defendants at this tribunal.
Toby Cadman stated: ‘The charge for which Mollah received the death penalty was based onthe evidence of one witness. There were two prior inconsistent statements that the Tribunal refused to consider. But in a court where the evidence fits the charges, it was sadly of littlesurprise the prosecutors and judges would manipulate and abuse this evidence without amodicum of examination.’
John Cammegh commented: ‘It has also now emerged that the person who gave evidence atMollah’s trial and whose evidence has sent him to the gallows, may not even be the personnamed on the statement, but an impersonator fully prepared by the authorities to give false evidence.’
Within hours of the final judgment on 5 December Mollah was moved to Dhaka Central Jail to prepare for his execution. Ordinarily there is a certain procedure to follow in these cases,most importantly the Jail Code, which prohibits the carrying out of an execution within 21 days of the delivery of the certified judgment being handed down when one seeks clemency.However there have already been statements by members of the Government that this execution will be carried out promptly.
Steven Kay QC remarked: ‘We have received information that a secret execution, in order to prevent unwarranted media attention, will be carried out within on 10 December 2013. Theorder to execute has come, it would appear, from the PM herself.’
Toby Cadman added: ‘We have been made aware that the execution is scheduled to be carried out immediately following the departure of the UN delegation on Tuesday. If this information is true it would tend to indicate that the Government of Bangladesh is intent on carrying out an unlawful execution in secret. This would also serve as the ultimate insult to the UN Secretary General, Ban ki-Moon, who was sent his Assistant Secretary General,Oscar Fernandez-Taranco, to mediate a compromise on the current election stalemate.
‘We call on the UN High Commissioner for Human Rights, Navi Pillay, and the SpecialRapporteur on Summary ExecutionMr. Christof Heyns, to urgently intervene and prevent the execution from proceeding  before the Government of Bangladesh takes the nation deeper into conflict.’
Signed:
Steven Kay QC
John Cammegh
Toby Cadman
Contact:
Toby M. Cadman
Legal Counsel
London, 8 December 2013
Contact: +44  7809 326 725
E-mail: toby.cadman@9bedfordrow.co.uk
/ends