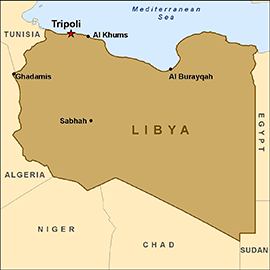 Martin Kobler, the United Nations envoy to Libya is urging its parliament to endorse a unity government that can help battle the expansion of Islamic State, otherwise known as Daesh. The extremist group has control over various oil installations, in addition to the central Libyan city of Sirte, and has launched numerous attacks across the country. “Every day lost in political dialogue is a day of gain of Daesh,” Kobler stated in a recent interview. “There is chaos. There is anarchy in which Daesh expands.”

The divisions within Libya itself, as well as its government, has enabled IS to spread across the northern coast of the country, which is just across the Mediterranean, a major passageway for migrants travelling to Europe. Defeating the group requires the formation of a Libyan government EU military with broad legitimacy and a unified army.

Meanwhile, an alleged “classified report” has been released by WikiLeaks. It is dated 29 January 2016 and written by the operation commander, Rear Admiral Enrico Credendino of the Italian Navy. The report is said outline the initial six months of Operation Sophia, the EU military intervention against refugee boats in Libya and Mediterranean.

A statement from WikiLeaks reads: “The report presses the responsible EU bodies to help speed up the process of forming a ‘reliable’ government in Libya that in turn is expected to ‘invite’ EU forces to operate within their Territorial Waters and later even give permission to extend the EU military operations onshore.”

For further details on the release of the report by WikiLeaks, click below: