Turkey has never had a good reputation in respect to human rights. Not only during the current state of emergency, but in general. Freedom of expression has always been limited, meaning that the judiciary has always tended to be a battleground for different political interests. In return people (mainly opponents of the system like Kurds, Alewis and Leftists) have suffered and paid the price. None of these statements are new. Nevertheless, what is new is that until recently things have never been so absurd.

Last month, the government issued a decree that was set to pave the way for the conditional release of 38,000 prisoners. In a move considered to have been to create jail space for others, thousands who will soon be arrested, burglars, counterfeiters, even serial killers were set free, but not the –so called- “political criminals”.

I cannot think of any democratic country that uses the term “political criminal” as an expression. However, in Turkey, to differentiate sentences regarding freedom of thought and expression from actual criminal offenses, the term “political criminals” is used and everybody here understands it. What it means is that these people did not commit a crime that includes any kind of disgraceful conduct and yet they are imprisoned. They are tried under anti-terror laws because a standard crime attracts double punishment under these criteria. This is how “political criminals” are sentenced to ridiculously long sentences in jail, even for something as simple as attending a meeting. Most shockingly of all, most of these supposed ‘criminals’ are in fact students. 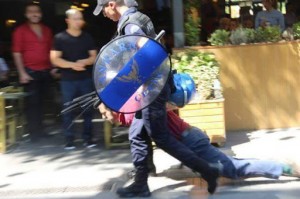 Police and a Student

The number of detained students has increased dramatically since I started getting involved with this issue nearly four years ago. Every other day there is a trial in one Turkish city or another; sometimes more than 3 or 4 trials within a single 24 hour period. Students are made to stand trial on charges of insulting the country’s government, President Recep Tayyip Erdogan, ‘the Turkish identity’ or holding opinions that are deemed to be separatist.

Those who care about this issue are either silenced or are fearful of being silenced.

My friends, even international journalists, are asking me if I am afraid for myself because of my support towards students. Why should I be? I do not think I am doing anything wrong. On the contrary, having taught as a lecturer at Bilgi University in Istanbul for the last 20 years, I find it very difficult to understand why so many students are accused of being terrorists and imprisoned while there is no valid evidence or fair trial.

How can universities, teachers, lecturers, parents, NGOs, youth organisations, and ministers of education, family, and justice keep silent about this? While our students come up against such bizarre accusations, why should we choose to withdraw? I really am even more afraid of this silence than I am of the unfair justice system.

For all teachers and lecturers, this should be our most important ‘lesson’. We should make it our most valuable responsibility to use our voice to point out the mistakes being made by the Turkish government. We do it often enough to the students we mentor.

In fact, all “adults” have to realise that accusing students of links to terrorism is a very serious indictment that will stay with them forever, drastically affecting their futures. This is especially true at a time when terrorism has been labelled as the greatest threat to civilization across the world.

Even though attempts are being made to prevent these unfair arrests and trials through the combined hard work of friends of imprisoned students, families, academics, selected NGOs and a few brave lawyers and judges, still more support is needed from the international community. 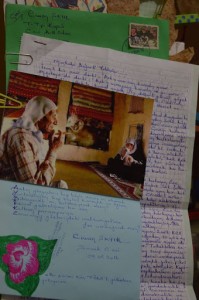 A letter from Prison

Help is required to exercise power on our government and judicial system so that students are treated with much more fairness and balance. Support is also needed to empower lawyers, judges and prosecutors who are too few in number in order to change the current system.

Having been given the chance to write this blog post, I believe that members of the international law community will stand up and connect with our efforts to help us proceed more quickly as time passes and more of our young people are spending the most important part of their lives in jail. We are ready to receive all your suggestions to make this voice heard and to join forces to give the freedom of students back to them.

After lecturing for 20 years I learnt that people, especially young people, belong to the whole world regardless of their ethnic, national or religious identity. We never know which student will find that one solution to a certain national or global problem and make all of us smile. We should give this chance to all. That is the most important motivation that helps me to stick with this cause, which I define as giving a hand to free all students in prisons. Today in Turkey, and maybe tomorrow somewhere else in the world.

Please contact me via ipekozel@gmail.com or +90 5327896968 if you are a member of the international law community that is interested in helping this cause.