Omnia Strategy welcomes today’s decision of the English courts to throw out the extradition case against Rwanda’s Chief of Intelligence and Security Services, Lieutenant General Karenzi Karake. The General has been freed unconditionally after the Spanish authorities conceded that the General has committed no offence that could be prosecuted in England and Spain. This admission entirely vindicates the position consistently advanced by both the General’s legal team and the Government of Rwanda, that the General should never have been arrested and that the extradition proceedings should never have been initiated. Omnia Strategy is pleased that the General can now return home to his family and to fulfilling his duties in Kigali.

Yesterday, a message sent from the official Twitter account of Rwanda’s President: Paul Kagame, thanked the legal team for their hard work in defending the General. 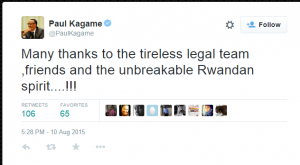