Defense Perspectives on International Criminal Justice is a unique law book as it is one of the only—if not the only— comprehensive discussions of the defence function in the various international courts and tribunals written primarily by experienced, practicing attorneys who have defended individuals in such courts and are in a position to provide real insight into the administration of international criminal justice, from the defence perspective, based on their experiences.

The book examines the function of the defense in the international courts during the various stages of international criminal proceedings (investigation, pre-trial, trial and appeal), the challenges faced by defense counsel in seeking to ensure the accused’s right to a fair trial, equality of arms, the importance of developing a theory of the defence case and a strategy for presenting it, professional ethics as applied to the defence, the prosecution and the judiciary, the United Nations Residual Mechanism for International Tribunals, post-conviction remedies, issues relating to those serving prison sentences and the structure and value of the Association of Defence Counsel Practicing before the ICTY; the only defence counsel association to date which has been formally recognized by an international court.

To learn more about Defense Perspectives on International Criminal Justice, click the link below: 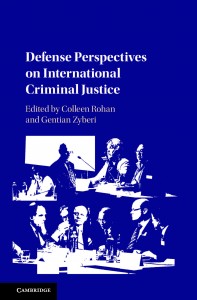