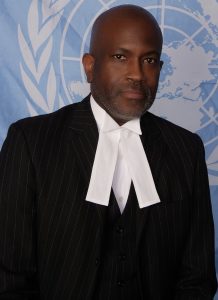 ‘Dr Richardson’s diverse and expansive legal knowledge and academic achievements have equipped him to function effectively and independently in many areas of legal practise. His ability to manage highly sensitive and confidential matters, coupled with his excellent interpersonal skills made him a valuable member of the legal team of the Attorney-General’s Chambers’. – Hon. Kathy Lynn Simmons, JP MP Attorney-General and Minister of Legal Affairs & Constitutional Reform.

Prior to his arrival at 9 Bedford Row in July 2020, Anthony practiced law in Bermuda cumulatively for almost 20 years as a general practice attorney, an in-house counsel for two international financial institutions, and a senior parliamentary counsel and senior legal advisor to the Governor and Government of Bermuda; on occasion working directly in partnership with law enforcement agencies such as the FBI, RCMP, Scotland Yard, and the Royal Navy/ US Coast Guard while engaged in the arrest of suspect vessels at sea. He also has several years’ experience on the judicial bench as a provisional judge and coroner in Bermuda and is a former Clerk and Law Researcher to two of Bermuda’s Chief Justices. Anthony was directly involved in the creation of Bermuda’s Financial Intelligence Agency in 2007.

As of 13th July 2021 Anthony is registered with the Bar Standards Board (BSB) as a Public Access Practitioner.

Anthony is an accomplished and accredited higher education legal academic. He is also an enthusiast of high-performance motor cars, fixed and rotary wing aviation (civilian and military) and is a skilled visual artist. He also loves to travel and experience new cultures.

University of London: Master of Philosophy/ Doctor of Law and Philosophy (Dual Degree)

University of Victoria (Canada): Bachelor of Arts in History and Political Science Degree

Canadian Institute for the Administration of Justice

The Society of Mediators

Date called to the Bermuda Bar