Abbas Lakha KC is widely regarded as one of the UK’s most successful and respected leading silks, with a heavyweight practice which encompasses a broad range of specialist areas. He is regularly instructed to advise upon and defend in the most
challenging and high profile cases. He is particularly sought after to advise in International financial crime cases, representing clients 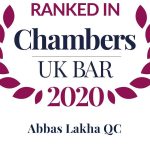 both in the UK and around the world.

He is retained as a Consultant to the Sabra Defence team in the Hague, who aredefending an accused alleged to have been

complicit in the assassination of the Lebanese Prime Minister, Mr. Rafik Hariri. Abbas has experience in all forms of Civil and Criminal Fraud and asset forfeiture work, including restraint and confiscation, and appears before the Tax Tribunals (First Tier and Upper Tier) in respect of VAT and Tax cases. He is highly respected for his advocacy, his attention to detail and his negotiating skills. Regularly instructed to advise at the pre-investigative stages of cases, Abbas has

extensive experience of representing high profile individuals for whom reputation management is a significant concern.

Areas of practice include:

Expertise in defending in large-scale HMRC MTIC/VAT frauds, SFO cases, Bribery and Corruption allegations, money laundering cases, and fraud related civil proceedings in the High Court [with civil Juniors], as well as proceedings before the First and Upper Tier Tribunal in respect of VAT reclaims and appeals against personal liability notices.

Work undertaken includes being a Consultant to the Sabra Team at the Special Tribunal for Lebanon, advisor to a Kenyan politician (extradition request from Jersey to Kenyan authorities) charged with corruption and money laundering, advisor to former British soldiers on anti-piracy duty in the Indian Ocean arrested in India, advising a Russian oligarch in relation to his financial affairs in the UK, and advising British Nationals residing in the UAE in respect of potential prosecution for financial fraud in the UK.

Abbas has experience of prosecuting and defending in Private Prosecutions on behalf of both individuals and corporate entities and is a member of the Private Prosecutors’ Association. He can lead clients through the procedural maze of the Criminal Justice System in mounting a Private Prosecution, the thorny issue of disclosure right up to preparing and presenting the prosecution case at trial.